More progress with the Millers

In a previous post (Miller Y-DNA: A minor break-through?) on 14 June 2021, I commented about information I have about my Miller ancestors, particularly dealing with Y-DNA tests.

In a second post (What’s new with the Millers?), on 26 October 2021, I described how I had traced back the ancestors of the only good match with my cousin Donald Miller to a place called Ilsfeld in Württemberg, Germany. The town of Ilsfeld is about 20 miles north of Stuttgart where, coincidentally, my son and his family now live.

I am confident I have found individuals back to the 7th great-grandfather of Richard Miller, whose Y-DNA so closely matched Don’s. I still had a problem, though, with where the 2nd great-grandfather of Donald and me fit in. I was hopeful that we might see where the two lines branched off, among the Ilsfeld families, but there was no obvious connection. It seemed like we would have to go back further.

I recently found a reference to the Württemberg Emigration Index. This publication lists the thousands of German and Prussian people that left Germany from the late 18th century to 1900. Approximately 60,000 people applied to leave the country during that period. The collection of records includes their names, date and place of birth, their residence at the time of their application and the application date. The application dates may have been close to the time they left. At the same time, I found many notes in baptism registers that show when people emigrated and the dates match those listed in the index. 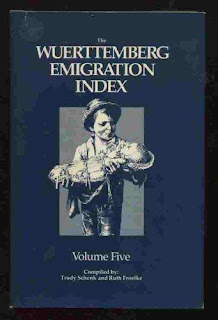 The index was constructed and published in eight volumes, in 1986, by Trudy Shenk, Ruth Froelke and Inge Bork from the original German government records. As described on Ancestry, “these records are not alphabetized nor are the pages numbered, which makes a search through them complicated and time consuming. In many cases, as many as eight pages were written on one person, including a birth certificate or a family record, military release, and renunciation of citizenship rights.” The book was microfilmed by the LDS Church but can be searched on Ancestry.

Only one individual with the same name as my 2nd great-grandfather and of the right age was recorded. He is shown as Conradt Mueller, born in Großbottwar, Württemberg in 1808. His destination was listed as Vienna, but it is entirely possible that he later decided to travel to America, either directly from Germany or from Vienna. 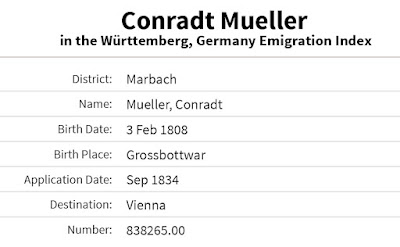 I looked at the baptism record for Großbottwar and found him shown as Johann Conrad Müller. Seeing his full name was even more exciting and gave me confidence I was on the right track.

There is a slight discrepancy with the birth dates shown on the two records, but they are close enough to suggest the emigration entry might have been mis-transcribed. The baptism entry says he was born on February 4th and baptized on the 5th. His forename likely did not contain a ‘t’. The transcription is probably in error in that regard as well.

Großbottwar is only about four miles from Ilsfeld, the home of Richard Miller’s ancestors. It is not out of the realm of possibilities that the families were spread across neighbouring parishes. 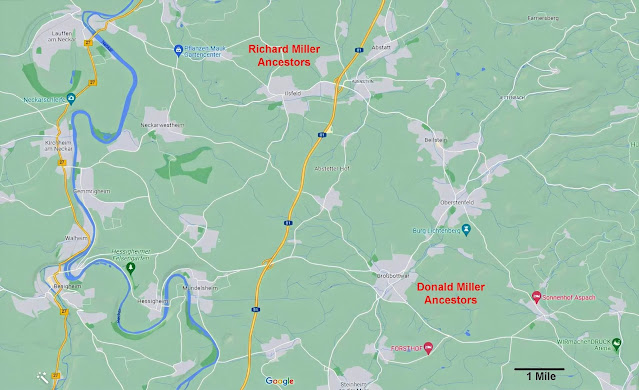 Assuming I had the right family, I went ahead to trace back Johann Conrad’s predecessors, starting in Großbottwar.

Johann Adam Müller (1770-1821) and Loisa Dorothea (1773-1828) Weiglin were married in Großbottwar on 27 September 1796. They had 15 children, however only four reached adulthood. Johann Conrad was the seventh child. A previous child was also named Johann Conrad. He was born on 10 January 1799 and died on 16 May 1800. The high rate of deaths of children was observed for many families in both the Ilsfeld and Großbottwar areas suggesting living conditions in the region were poor.

Johann Adam’s parents were Adam Müller (1734-1807) and Catharina Magdalena Riegertin (1731-1804). They were married in Großbottwar on 14 February 1764 and had five children there. Only three lived past toddlerhood.

Adam Müller’s parents were Johann Jacob Müller (1702-1747) and Maria Barbara Fincken (1705-1783). They were married in Großbottwar on 12 February 1726 and had eight children. I have not yet found Adam’s death record or the birth and death records for Maria Barbara. They may have left the area after the birth of their last child.

Their marriage record shows their marriage date, fathers’ names, Johann Jacob’s occupation as well as the dates of Maria Barbara’s second marriage and her death.

Johann Jacob’s parents were Hans or Johann Jacob Müller (1676-1737) and Maria Catharina Schleicher. They were married in Oberstenfeld on 13 February 1700. Baptism records show they had three children. Birth and death data for Maria Catharina has not yet been found.

The marriage record for Hans Jacob and Maria Catharine shows his father as Hans Martin and her father as Claus. Neither have been found in the Großbottwar registers yet. It is certainly possible they migrated into the area.

The familial relationships were interpreted from information in the BMD registers. Birth/baptism entries often have death information if the individual stayed in the area. Marriage entries commonly have the names of parents as well as the dates of births of the bride and groom. Some death records also record the parents’ and spouses’ names as well as birth dates. Within a parish it is thus possible to reconstruct families over several generations.

Müller families can be found in many areas around Ilsfeld and Großbottwar, although those two appear to have had the largest concentration. I have been through the registers for several of them, looking for interfamilial relationships. The families may well be related or at least derive from some common ancestors, however that cannot be, or at least has not yet been demonstrated. I did find that Müller men often married women from other parishes. And there is some reason to believe that some families moved around, not just to foreign lands.

Even with the complete BMD entries back to the turn of the 18th century, I have not been able to tie together the ancestral lines of Donald (and me) and Richard.

The comparison of ancestral lines now looks like this… 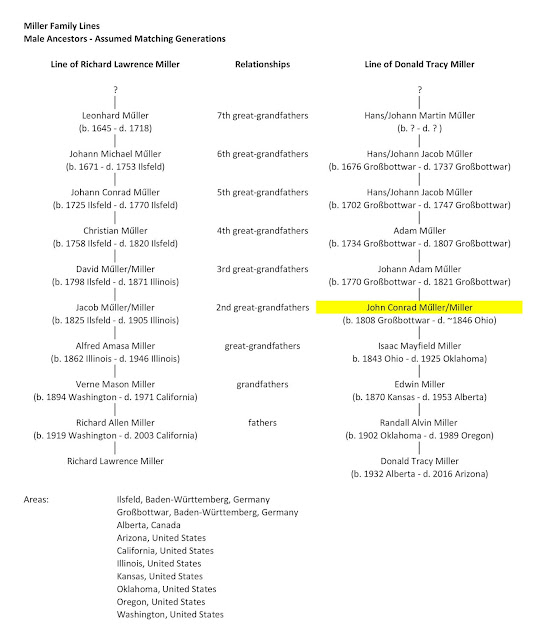 Richard and I (for Donald’s sample) are both having a fuller analysis of the Y-DNA done – the “Big Y”.

As Family Tree DNA states, the Big Y analysis is meant to “explore deep ancestral links on our common paternal tree. This test examines thousands of known branch markers as well as millions of places where there may be new branch markers. The Big Y test is intended for users with an interest in advancing science. It may also be of great interest to genealogy researchers of a specific lineage.” I am hoping that we might be able to find out how far back the mutations happened and give us a better idea of who our common ancestor might have been

Posted by Discover Genealogy at 12:54