We are finally into Fall here. It took a while. We enjoyed a nice summer with flowers still blooming right through last week. The forecast now is for negative temperatures every night. My planters have been cleaned out. The outside water taps in the condo complex will be shut off next week. And soon there will be snow.

We don’t get a lot of snow here, compared to many areas in eastern Canada or the northeast US. Our climate is dry, bordering on semi-desert so there is not as much moisture in the air to turn into the hard stuff.

There are good things and bad things about snow, although you would not convince our friends who live in the southern US or Australia that anything positive could come from having a white blanket fall on you.

Snowfall Around the World

We are used to a bit of snow, though, and rarely let it stop us from doing what we want. Take the photo shown here yesterday of ardent golfers braving the elements. 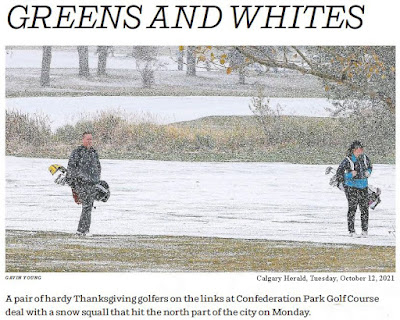 One of the things that has stuck with me over the years is something I read about the different kinds of snow as described by northern societies, the Inuit. I think it was either in the book, My Life With the Eskimo, by Vihjalmur Stefansson, first published in 1913, or in People of the Deer by Farley Mowat, published in 1952. Both are worth reading by the way.

Anyway, it has been said, and written, by many people that there were over 50 words for snow, depending on its quality, moisture content, usefulness in building igloos, etc. Part of that idea is myth; part of it is in how different conditions in which snow is found are described and what that might mean to daily living or hunting. That can be important because, for many months of year, northern communities lived every day with snow.

The idea about there being many words for snow may come from how snow or snow conditions are described, much as we southerners might use different phrases. For example, some of the Eskimo-Aleut lexemes for snow include:

Photo of people in a northern community from My Life With the Eskimo (Stefansson, 1912)

A lot of superstitions have spring up over the centuries concerning snow. (possibly by many who wished it would go away?)

Did you know that if you throw a shovelful of the first snow over your head you will not be cold all winter? Apparently if snow falls on your head from a pine tree, that means good luck.

It was also believed that seeing bloodstains on snow meant good luck, but if the stains were partly obliterated, it would be bad luck to come across them.

If kids want a snow day, to keep schools, closed, they should put a spoon under their pillow, or flush ice cubes down the toilet, or put their pyjamas on inside out, or do some combination of the three.

One of the oldest tales involves the wooly caterpillar, or tiger moth larvae. If the brown bands are narrow, then a harsh winter with lots of snow is coming.

There is an old poem about Candlemas Day, or as we think of it, Groundhog Day, that has to do with snow – this one a New England version:

As far as the sun shines in on Candlemas Day,
So far the snow blows in before May Day.
If Candlemas day be fair and bright,
Winter will take another flight;
If chance to fall a shower of rain,
Winter will not come again.

If Candlemas Day be bright and clear,
Be sure you will have two winters that year.

One of my favourite subjects to write about is the Little Ice Age. It was a period when lives and lifestyles were significantly altered due to the persistent cold and bad weather – including snow.

Snow was almost everywhere! Regions from the Arctic to southern Europe experienced snowstorms. There was more of it and it stayed on the ground for months longer than it does today.

Between 1560 and 1630, during the coldest part of the period, poor and erratic weather was common with frequent and unseasonal snowstorms across Europe. Artwork from those times reflect the wintery conditions commonly experienced.

Harvests were impacted by the bad weather, often by snow and frost, resulting in famine conditions. In Manchuria, for example, there were several years between 1573 and 1620 when there was extreme snowfall which a negative effect on agricultural production and livestock populations.

Where we live, families take the time to enjoy the snow, skiing, tobogganing, snowball fights, making snowmen, snow forts or snow angels. Or just bury yourself in it! If you can get to the countryside you might enjoy a sleigh ride.

There are, of course, lots of songs that celebrate snow as well. Some of the classics are I’ve got My Love to Keep Me Warm (Billie Holiday), Snowbird (Anne Murray), White Christmas (Bing Crosby), Sleigh Ride (Andrews sisters), Frosty the Snowman (Gene Autry), Let it Snow (Rosemary Clooney)

Shoveling snow off sidewalks and driveways is not fun, but we do get our exercise, and it’s a way to entertain the grandchildren.

Whatever you may think about snow, I hope you get a chance to enjoy this winter with your family, with or without the white stuff. We intend to after having missed being able to do it for the last couple of plague-filled years.

Also enjoy this recitation of a famous poem by Robert Frost, Stopping by Woods on a Snowy Evening. 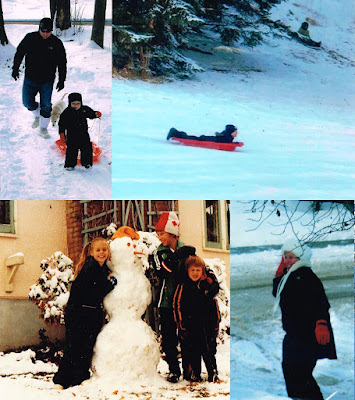 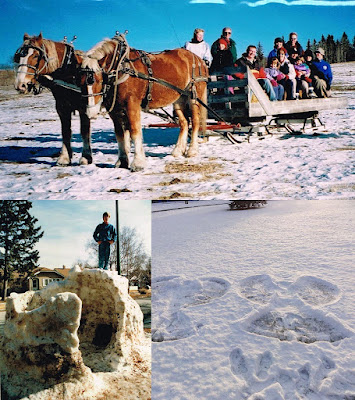 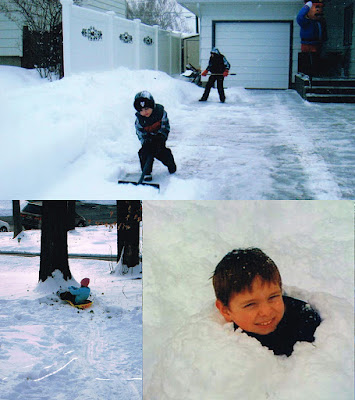 Posted by Discover Genealogy at 11:10 No comments: