A New Source of Information for Mother Nature’s Tests

I received this post from The Global Warming Policy Foundation today. It concerns new studies of weather events in England during the Little Ice Age. It’s worth a read.

Dr. Madeline Bassnett, along with colleagues at Western University, have organized a new project. Their website is Weather Extremes in England’s Little Ice Age 1500-1700. Their introduction says, “Explore the Weather Extremes historic weather database creation project, which uses English national chronicle records (Holinshed, Stow), local chronicles, letters, diaries, and pamphlets to document extreme weather and meteorological events (such as earthquakes and comets) between 1500-1700. These years were part of what is known as the Little Ice Age, a period of global cooling. Written accounts—both formal and informal—are crucial to documenting weather and climatic patterns prior to the development of weather recording technologies.” 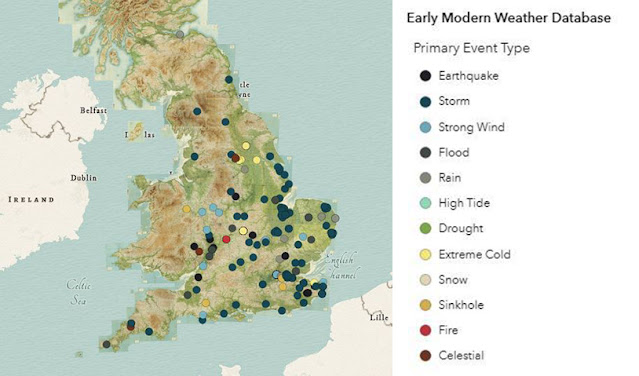 You can download their dataset in various formats to study for yourself. This data is available to use with attribution for non-commercial purposes. There is an interactive map. You can click on locations to see what weather events transpired and when. There are 252 records included in the database so far.

Event and records are subdivided by the type of category in which they fit and how they may have impacted animals, trees and crops, humans, and property. Storms are the largest group, as might be expected. Each record is located on the index map so one can see where they occurred. 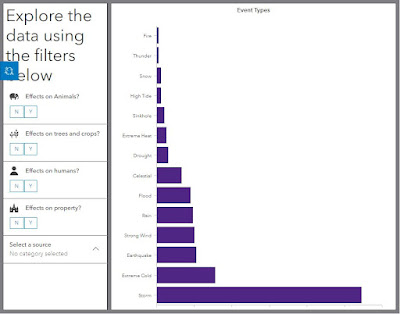 This looks like a great source of information about historical records of different types of natural, and other, events. I intend to spend time looking at the data to learn more about what specific events occurred and where that will help me with my own research.

Records can also be reviewed by the year in which they occurred. 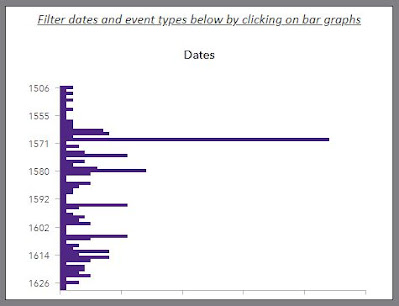 Here is one entry included in the dataset:

Meterological Record: "At last, he imbarked in one of the queenes majesties ships called the Greiehound…And as they were on the furthest coast toward Newhaven, they were by contrarie wind and foule weather driven backe toward the coast of England; and plieng towards Rie [Rye], they forced the capteine of the ship, a verie cunning seaman named William Malaine, and also the maister and mariners, to thrust into the haven before the tide, and so they all perished seven of the meaner sort onlie excepted, whereof three died shortlie after they came to land."

Humans: Deaths of Thomas Finch, over 200 others

Cross References: John Stow. Annales, Or, a Generall Chronicle of England. Begun by John Stow: Continued and Augmented with Matters Forraigne and Domestique, Ancient and Moderne, Unto the End of this Present Yeere, 1631. By Edmund Howes, Gent. London, 1632, pp. 654-655.

Posted by Discover Genealogy at 11:33 No comments:

I was reminded by a post on the Newspaper.com blog page that April 14th will be the anniversary of the Black Sunday Dust Storm that raged across Oklahoma, Kansas, Colorado, New Mexico, and Texas in 1935. The piece describes many of the experiences of residents of those states during the storm but mostly during the whole depression-era drought.

I commented briefly about droughts in a post here on 29 May 2017 and mentioned effects of the Dust Bowl on migration (Natural Disasters and Family Misfortunes 3: Drought). I have since presented a talk about Drought and Family History at THE Genealogy Show spring event. I hope to share it again in the future.

Newspapers of the time quoted dozens of farmers about the hardships of the drought-stricken lands and the storms in particular. The storm of April 14th was not the only one that occurred during the drought years, but it was arguably the worst. Storms were all too common in areas where farms had dried up so much that topsoil was being blown away. Once it was gone there was no hope or reason for those that had survived to stay.

View of a dust storm that occurred at Spearman, Texas, on 14 April 1935. The photograph was submitted by the official in charge, Houston, Tex., and was taken by F. W. Brandt, cooperative observer at Spearman, Texas.

The destruction of farms ultimately led to passage of the Soil Conservation and Domestic Allotment Act of 1936. It was a measure adopted to allow the federal government to pay farmers for reducing their production and to conserve soil from being eroded.

As I have pointed out in my presentation about droughts, as well as talks about other natural phenomena, disasters such as storms, floods, earthquakes, volcanic eruptions, epidemics, famine and droughts are all elements of Mother Nature’s arsenal that more than occasionally have impacted people. Recognizing their scope, effects and consequences are important parts constructing family histories.

Droughts, like most natural events can occur in any area, at any time and under any climatic conditions. They can be short-lived or span centuries. The worst of them have resulted in bad to non-existent harvest yields, leading to food shortages and extreme hardships on people who endured them.

Events like the Black Sunday storm could be deadly, causing immediate fatalities or long-lasting respiratory problems like “dust pneumonia.” Such maladies led to authorities and the Red Cross urging people to wear masks to prevent inhalation of the fine dust particles.

Red Cross volunteers in wearing masks to protect their lungs from blowing dust; taken in 1935 in front of the Red Cross building in Liberal, Seward County, Kansas (Kansas Historical Society)

Family historians who had ancestors living in the southwest USA, as well as other regions that experienced drought, during the 1930s will find reports like this of interest.
Posted by Discover Genealogy at 08:17 No comments: