Climate Always Has and Always Will Change

I write a lot about the implications of climate change on people and families of past centuries. What about the future? Here is an article that explains very clearly why what we see today is perfectly natural.

While the Climate Always Has and Always Will Change, There Is no Climate Crisis

The emphasis on a false climate crisis is becoming a tragedy for modern civilization, which depends on reliable, economic, and environmentally viable energy. The windmills, solar panels and backup batteries have none of these qualities. This falsehood is pushed by a powerful lobby which Bjorn Lomborg has called a climate industrial complex, comprising some scientists, most media, industrialists, and legislators. It has somehow managed to convince many that CO2 in the atmosphere, a gas necessary for life on earth, one which we exhale with every breath, is an environmental poison. Multiple scientific theories and measurements show that there is no climate crisis. Radiation forcing calculations by both skeptics and believers show that the carbon dioxide radiation forcing is about 0.3% of the incident radiation, far less than other effects on climate. Over the period of human civilization, the temperature has oscillated between quite a few warm and cold periods, with many of the warm periods being warmer than today. During geological times, it and the carbon dioxide level have been all over the place with no correlation between them.

Download and read the whole piece using the following link.

Posted by Discover Genealogy at 08:14 No comments:


If you wonder whether winter conditions are better or worse these days, here is a story from that past that illustrates not much has really changed. The following is from History.com’s This Day In History website:

On one of the worst days of the “worst winter in the West,” nearly an inch of snow falls every hour for 16 hours, impeding the ability of already starving cattle to find food.

The plains ranchers had seen hard winters before, but they had survived because their cattle had been well-fed going into the winter. By the mid-1880s, though, the situation had changed. In the hopes of making quick money, greedy speculators had overstocked the northern ranges in Montana, Wyoming, and the Dakotas. Deceived by a string of mild winters, many ranch managers were also no longer putting up any winter-feed for their stock. Disaster arrived in 1886.

The summer of 1886 was hot and dry, and by autumn, the range was almost barren of grass. The cold and snow came early, and by January, record-breaking snowfalls blanketed the plains, forcing the already weakened cattle to expend vital energy moving through the snow in search of scant forage. In January, a warm Chinook wind briefly melted the top layers of snow. When the brutal cold returned (some ranches recorded temperatures of 63 degrees below zero), a hard thick shell of ice formed over everything, making it almost impossible for the cattle to break through the snow to reach the meager grass below. With no winter hay stored to feed the animals, many ranchers had to sit by idly and watch their herds slowly die. “Starving cattle staggered through village streets,” one historian recalls, “and collapsed and died in dooryards.” In Montana, 5,000 head of cattle invaded the outskirts of Great Falls, eating the saplings the townspeople had planted that spring and “bawling for food.”

When the snow melted in the spring, carcasses of the once massive herds dotted the land as far as the eye could see. One observer recalled that so many rotting carcasses clogged creek and river courses that it was hard to find water fit to drink. Millions of cattle are estimated to have died during the “Great Die Up” as it came to be called, a darkly humorous reference to the celebrated “Round Up.” Montana ranchers alone lost an estimated 362,000 head of cattle, more than half the territory’s herd.

Besides sending hundreds of ranches into bankruptcy, the hard winter also brought an abrupt end to the era of the open range. Realizing they would always have to grow crops to feed their animals, ranchers decreased the size of their herds and began to stretch barbed wire fences across the open range to enclose new hay fields. By the 1890s, the typical rancher was also a farmer, and cowboys spent more time fixing fences than riding herd or roping mavericks. Belatedly, settlers realized that they had to adapt to the often-harsh demands of life on the western plains if they were to survive and thrive.

A quick search of the Internet will reveal other similar storms and outcomes on the North American prairie: Schoolhouse Blizzard (12 January 1888); Kansas Monster Blizzard (1-3 January 1886).

Posted by Discover Genealogy at 11:38 No comments:

2022 was quite a year here at MyHeritage. We released several fantastic new features, including DeepStory, Family Tree Timeline, Photo Tagger, and AI Time Machine™;  added 2.5 billion historical records in 271 new collections; launched our podcast, Blast From My Past; and released several improvements to existing features to make your family history discovery experience on MyHeritage that much better. We also facilitated many emotional reunions and enjoyed the stories of incredible discoveries our users made through family history research and DNA — all while keeping true to our core values of innovation, compassion, and the desire to have a positive impact on the world.

And those are just a few of the highlights! 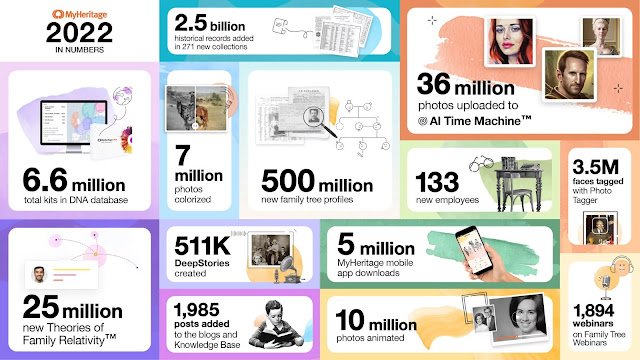 Posted by Discover Genealogy at 07:45 No comments: