We are Very British!

I read a lot about other genealogists and their searches for ancestors in continental Europe and other regions. I have even helped a few people find their family members in South America, Germany and The Netherlands. But in my family, when you back a few generations, we are very British!

My Shepheard ancestors originated in Devon, England. As I have discussed here previously, as far back as I can trace them – the early 17th century – they lived in or near the parish of Cornwood in southeastern Devon County.

My DNA (from an analysis by 23andMe) is 100% European in origin: 43% British, 14% French and German, 7% Scandinavian and 32% broadly Northern European. One of my mother’s great-grandfathers definitely came from Germany, although we have not been able to find out specifically where he was born or anything about his family. It is speculated that, five generations back from her, there may also have been a French connection, however, again, we have not be able to confirm such roots. The Scandinavian contribution may have come down through my father’s mother. Her grandfather came from the eastern part of Scotland which may have had a possible Viking influence. 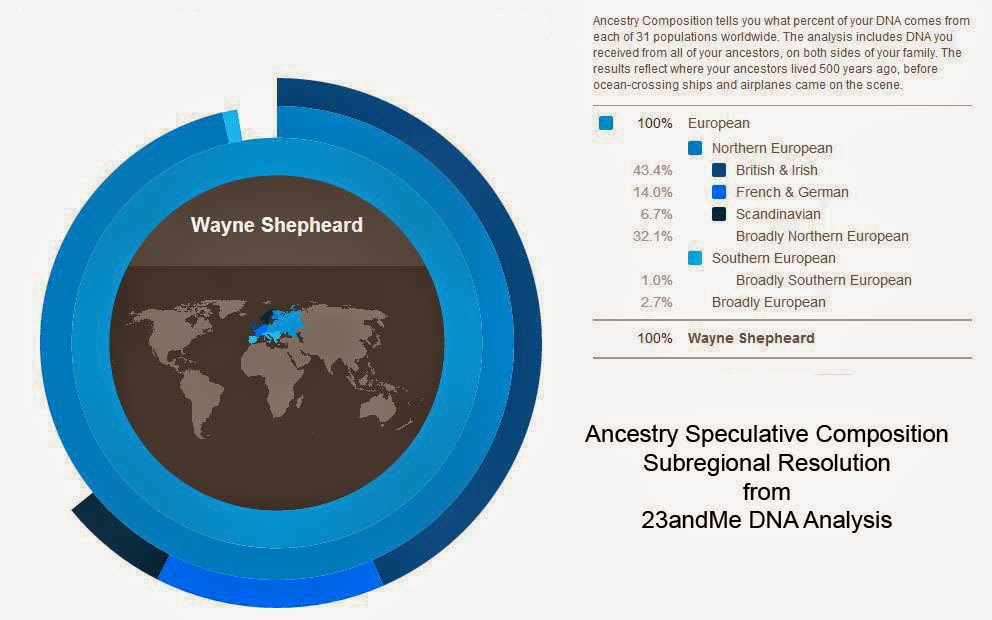 I have several lines that go back through the USA, the full origins of which have not yet been determined. Most of them were likely from England or Scotland, the first people having arrived in North America in the 17th century as colonists or endured servants. My father’s side was 100% British (6 ½% of that Scottish) and my mother’s side was probably at least 85% British. That would give me at least a 92% British background; the rest is a possibly a mixture of German (6 ¼%) and French (1 ½%), somewhat lower than the 23andMe analysis suggests.

Both of my wife Linda’s parents were born in Scotland and met in Canada after they emigrated in the 1920s. I am still tracing many of her lines but have found all of her ancestors came from various parts of Scotland: her paternal line from Banffshire, Moray and Nairnshire in Northern Scotland; her maternal line from Moray and the Shetland Islands. Over 85% of her DNA (also from 23andMe) originates in Britain and Ireland and the rest mainly from Northern Europe. We have not found any family lines for Linda outside of Scotland so whatever contribution the DNA represents outside of Britain will remain a mystery. I have absolutely no explanation for the 0.1% East Asian & Native American DNA! For now we regard her heritage as being 100% Scottish. 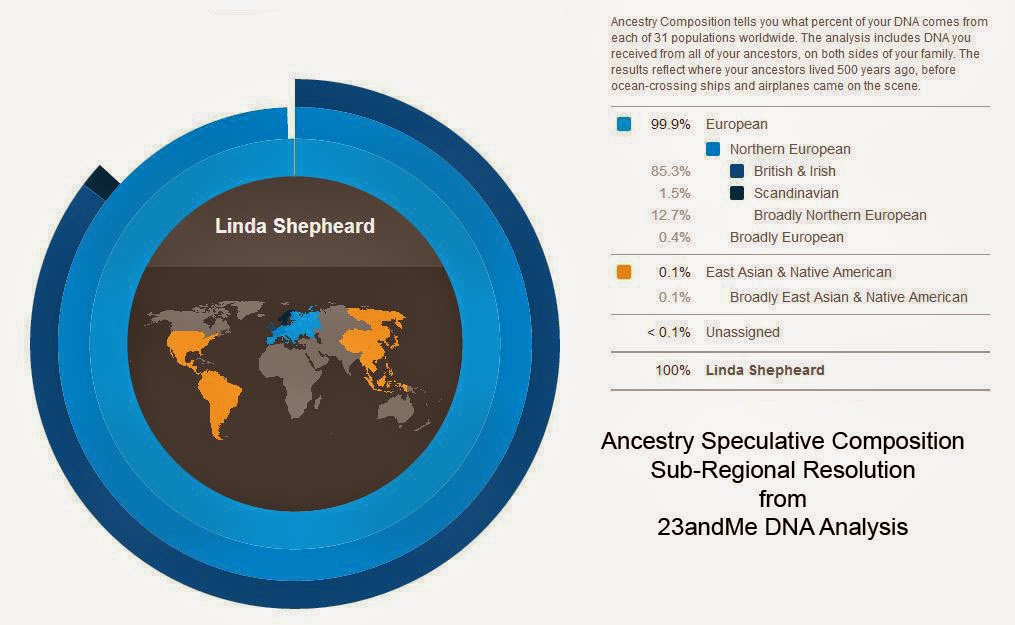 Wayne Shepheard is a volunteer with the Online Parish Clerk program, handling four parishes in Devon, England. He has published a number of articles about various aspects of genealogy and is a past Editor of Chinook, the quarterly journal of the Alberta Family Histories Society. Wayne also provides genealogical consulting services through his business, Family History Facilitated.
Posted by Discover Genealogy at 07:15 No comments: