In a post on my blogsite, Mother Nature’s Tests, I wrote about the Drought During the Establishment of Early American Colonies. Well, those sites have a new problem caused by Mother Nature. They are in danger of erosion by the James River and flooding by the shift in sea level.

Many people would have us believe that climate change is causing ice caps to melt and sea level to rise. That may be partly true but what is really happening on the east coast region of the United States, and elsewhere in the Northern Hemisphere in regions next to where the Pleistocene ice cap existed, is that the land is sinking, making it appear as if the sea is rising.

During the last ice age, thick accumulations of ice depressed the Earth’s crust causing it to sink into the mantle on which it is “floating” to maintain static equilibrium (isostasy). That resulted in the viscous mantle being forced away from the ice sheet resulting in lands along the perimeter of the glaciers to rise. When the ice sheets melted, the reverse processes occurred with the mantle material adjusting to its pre-glacial state: the lands under the glaciers rose (isostatic or post-glacial rebound) and the lands adjacent started to sink. This is shown on the diagram below. 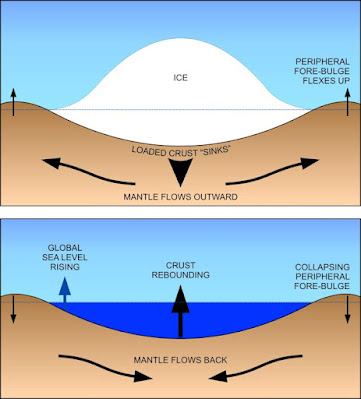 The coastal region from Newfoundland in the north to North Carolina in the south and then west to the Pacific Ocean is currently still sinking as the mantle flows back toward Canada. The rate of downward vertical movement is up to mm per year.

One can see the results of rebound in the Canadian Artic region. It is clearly indicated in areas where beaches such as those along Bathurst Inlet (below) march toward the ocean, each getting younger.

Along the eastern seaboard of the United States the shoreline is advancing landward as the relative sea level rises. The sedimentary strata, for those interested in the geological conditions, shows a vertical sequence of marine sediments overlying shoreline deposits which in turn overlie nonmarine deposits. This is called a transgressive sequence.

A significant effect of the landward migration of the shoreline is observed in the destruction of infrastructure when major storms attack the coastal areas. Houses that were at one time well inland now find themselves nearer to the ocean and are destroyed by hurricanes that make landfall nearby. The aerial photo below shows the damage inflicted on a row of homes (outlined in red) at Nags Head, North Carolina, by a 2009 storm. The position of the shoreline back to 1849 are indicated. The shore will continue to move inland as the land continues to sink. 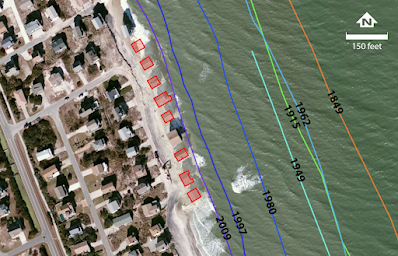 When the Jamestown colony was established in 1607, the region was in the middle of the worst drought in over 700 years. The conditions resulted in poor to non-existent crops over the next few years. By 1610 it had been abandoned.

Today the sea is relentlessly advancing on the area where the colony was located. The water of the Chesapeake Bay region has risen about 1 ½ feet over the past 100 years. Jamestown Island in less than three feet above the waters of the James River. Eventually, the site on Jamestown Island will be taken over by the river and the rising groundwater.

Posted by Discover Genealogy at 04:58 No comments: