One is in the December-January issue of Internet Genealogy and titled Memphis Yellow Fever Epidemic of 1878.

Over 20,000 people died between August and October of 1878 in dozens of areas along the Mississippi River. Memphis was one of the urban centres impacted, where over 17,000 cases were reported and over 5,000 people died. Thousands more left the city to escape the epidemic. In short order, the city was virtually emptied. The paper summarizes the history and the fate of some of the residents.

A subscription to Internet Genealogy magazine can be obtained at https://internet-genealogy.com/ 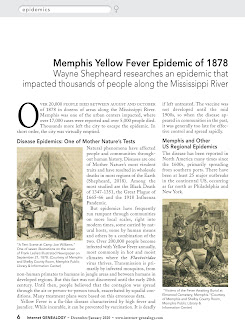 The second paper is in the Christmas issue of Family Tree (UK magazine). It is about The Great Frost & Famine of 1739-41.

Most genealogists will have read about the almost countless famines that occurred during the late Middle Ages. Stories of the experiences of ancestors and how they coped may have been incorporated into a few family histories, at least in terms of the times and places in which they happened. But is there a clear understanding of how such events came to occur? Or why they appear to have been more common during that time-period? Or how such events were so impactful? A close look at the event of 1739-40 gives us some answers.

A subscription for Family Tree, or a copy of the issue can be obtained at https://www.family-tree.co.uk/store/latest-issue/family-tree-magazine/ 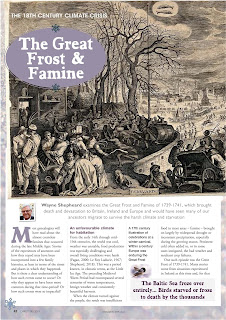 Posted by Discover Genealogy at 14:21 No comments: