A friend of mine, Greg, wanted me to look into his ancestral lines recently. He knew that the spelling of his surname had a history of changes, and one of the questions we wanted to uncover was when and where those changes happened.

We accomplished that goal discovering that the current version of his last name only came into use in the early 20th century, but for what reason we still do not know. The change did not seem to be because one person stepped out just to be different. A whole generation made the shift.

I think we are all interested in finding characters in our family trees, people who are just a little bit different or just plain outrageous. They spice up what might be bland, unexciting stories.

In this case, after a brief update on my progress, Greg responded, “Wow, you are on a journey! Awesome work. Still waiting for a horse thief or some nobility. 🤔 🤔 🤔” 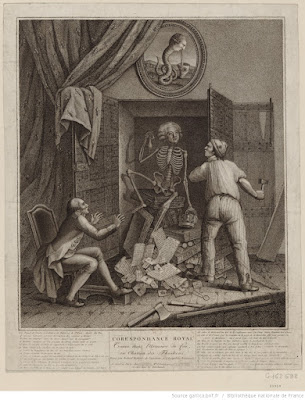 Of course, it was not long until I was able to oblige him, not quite with a horse thief or an Earl, or a skeleton in the closet, though. It turned out he had a 2nd great-grandfather, Albert Penberthy, who appeared to be a bit of a rogue. I thought it might one of those cases of “Be careful what you wish for…”

One source of research I have begun to use more is newspapers. When you lose someone, that is you cannot find them in a census or other record where most of the family are listed, a search of newspaper reports of the time can be helpful. That’s what I did for this individual.

I found the name of Albert Conybeare Penberthy in a 1903 court record from Surrey, on Ancestry.com, in which he was charged with bigamy. The name fit with what I knew about his family, his mother’s maiden name being Conybeare, but I knew the family was from Swansea, Wales. Surrey, England, seemed a bit out of the way. I went to The British Newspaper Archive to see what else could be learned and in their files found several reports of the charges along with his explanation of events. The articles confirmed this was Greg’s ancestor. 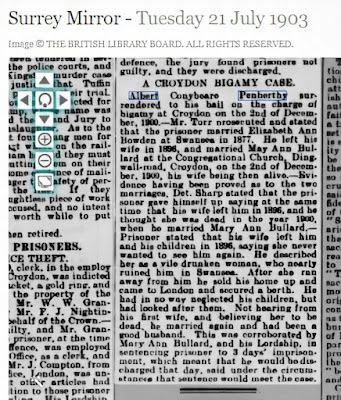 On 13 March 1903 Albert was found guilty of "Feloniously marrying Mary Ann Bullard, at Croydon, on 2nd December 1900, his wife Elizabeth Ann, to who he was married at Swansea, on 16th January 1877, being then alive." He was sentenced to 3 days (without hard labour) at Wandsworth Prison. In court Albert claimed his wife had left him and his children and described her as a “vile drunken woman.” He said he believed she was dead when he married Bullard.

On the face of this report, and the fact that, according to census records, Elizabeth was still living with her children, it might be easy to think Albert was the partner in the wrong and was the person who had left his wife and children, as the news item stated.

As I delved into the story of the family, however, I found there were a lot of dynamics at play that may have led to discord and an eventual split. There is some information, including a daughter’s marriage record, that shows Albert worked for a time as a travelling salesman. If it was true, that separation from his wife and family may have led to a rift. But he had not always done this kind of work, so that could not have been the whole explanation.

On the 1877 marriage record for Albert and Elizabeth Ann Bowden, he was recorded as a grocer, living at 2 Paxton Road, Swansea.

The 1877 birth record for their first child, Charles Henry, showed Albert to be a salesman, the specifics of which were not stated. On the 1878 birth of their first daughter, Mary Edith, he was shown as a draper’s assistant. That was an occupation he had apprenticed. The birth records for their other six children – Hilda in 1881, (a second) Hilda in 1882, Minnie in 1883, Ernest James in 1884, Thomas in 1887 and Annie Eleanor in 1893 – show Albert’s occupation as grocer.

Albert apparently joined his father in the grocery retail business shortly before his marriage. The 1881 census has Albert and his family living with his parents, Thomas and Elizabeth, at 2 Paxton Street, with both he and Thomas working as grocers. One might expect the store was at the same address. Albert’s parents both died in 1884 (Elizabeth in February and Thomas in December) apparently leaving Albert in charge of the grocery business. As noted, birth information for his last two children in 1887 and 1893 still show him as a grocer.

Curiously, neither Albert nor Elizabeth Ann can be found on the 1891 census residing at 2 Paxton Street, even though the 1893 birth record for Annie Eleanor says she was born there. The electoral registers for 1892-93 and 1893-94 list Albert as living at 34 Recorder Street which was just a few doors from 2 Paxton Street. The 1891 census records for most of Recorder Street are missing, though, so it may be possible that the whole family was living there or in the process of moving to that address.

The family suffered through tragedies of having four children die, (the first) Hilda in 1881 (at 11 months of age), Minnie in 1883 (at 3 months), Ernest James in 1895 (at 11 months) and Thomas in 1887 (at 3 months). It seems clear that these events took their toll on the marriage. Probably by 1893, after the birth of their last child, Albert and Elizabeth Ann were at odds with one-another and may have separated.

In 1899 Albert was named as a debtor on court records in Swansea and sentenced to 28 days in jail and a fine of £8/16s/11d. It would have been shortly after this offence that he would move to the London area.

By 1901, Albert was living in Croydon, near London, with Mary Ann, then shown as his wife. Elizabeth Ann was still in Swansea, living with her daughter Mary Edith on William Street, just up the block from the old residence on Paxton.

In 1911, Albert and Mary Ann were still together although she had reverted to her previous name of Bullard. The record shows the information about their marriages to others, although his children were miscounted. There were eight of them and four died, not seven children of whom three died as shown. Mary Ann also had two children die as infants. Maybe that is a common element that brought them together after her husband died in 1899.

The couple appear to have lived together until their deaths, Mary Ann in 1932 and Albert in 1933. Perhaps, to preserve appearances, Mary Ann was shown as Albert’s housekeeper on the 1911 census. Her burial record also states she was the widow of James Bullard, not the partner of Albert.

Notwithstanding their estrangement, Albert left his estate to his wife, Elizabeth Ann, valued at £214/11s/8d. We don’t know how Elizabeth Ann felt about accepting this final offering. She died in 1935.

Perhaps Albert was not the rogue the newspaper report made him appear to be. As the pieces of the family history puzzle came together, it looks more like heartbreaking events overtook them, resulting in a final breakup and estrangement. We do not know if any of the surviving children had any communication with Albert and it is sad to think they did not.

Posted by Discover Genealogy at 05:39 No comments: