The Virtual Genealogical Association will hold its online conference on November 13th to 15th.You can find out more information about on their website. Registration fees are very reasonable considering the lineup of speakers and topics: US$59 for VGA members; US$79 for non-members. 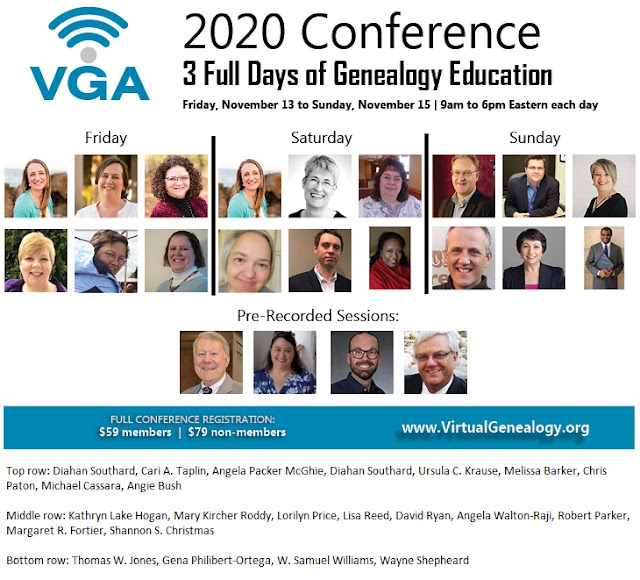 I was fortunate to have been invited to present a talk at this year’s event. My subject will be Surname Origins – Why? When? Why Then? It is based on an article of the same title I wrote for the Journal of One-Name Studies in 2018. My session will be pre-recorded and be viewable before the event begins, as well as during and after of course. 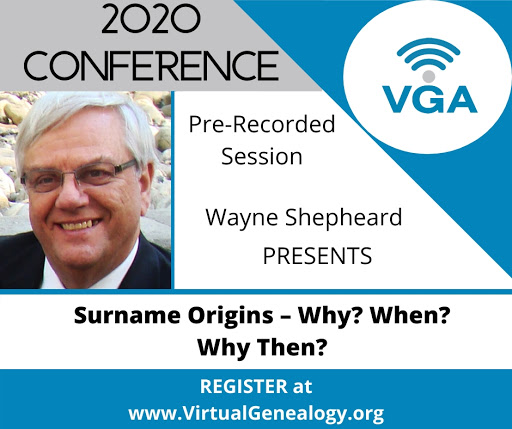 Here is a little teaser about the subject. This information is from my analysis of the Durham Liber Vitae about which I wrote in the aforementioned JOONS article.

Almost all of the names from the 9th and 10th centuries from the Durham Liber Vitae manuscript show only a single name for each individual. A pattern began to emerge in the late 12th century with regard to references to manors, estates and monasteries. In these instances, single names were appended with “de” (of) along with the name of the location of their residence or affiliation and occasionally their title or position.

By the 14th century, the full use of surnames had begun in earnest, many of them modified from those locative descriptions, but many also from occupations in which individuals or families had been engaged, positions in the community, familial relationships or physical traits (together I refer to as descriptive). During the same, and later periods the use of locative descriptions declined. Last names also began, with spelling variations, to look more “modern” or what we would recognize today.

By the end of the 15th century, the use of single names and references to areas or residences (manors or monasteries) were almost non-existent.

Many other medieval sources have also been reviewed and will be highlighted in the talk. All of them show similar timing in the introduction and use of surnames.

So, was there an underlying reason why people began to use, or at least to be recorded with a surname, after nearly 1,000 years (post-Roman Empire) of non-use? Why did it seem not to occur until the 14th century? Was it in response to political or societal shifts, coincidentally across almost all of Europe? Or was it because of something else?

Those are the questions we will investigate in my presentation.

I hope many of you can join in and listen to many of what looks to be interesting and valuable genealogical research talks.

Posted by Discover Genealogy at 07:02 No comments: