Most of us have probably heard stories about sailors – raucous, hard-drinking, women-chasing voyagers common to every port. Most of these tales I am sure are not true. Those making a living as mariners were as likely as not to be honest, hard-working men, many supporting families at home.

The work of sailors took them to many ports in many countries, some interesting, others dirty and dangerous. Just being at sea had its risks, of course. Bad weather and mechanical problems could lead to aimless floating or being driven by heavy winds and seas on to rocky shorelines.

In a previous post (16 September 2020, My Great-Grandfather was involved in a shipwreck!), I wrote about how my great-grandfather survived a shipwreck on the coast of Cornwall, England. James Shepheard was a widower when he first went to sea to work as a steward in the 1890s. He sailed on a number of steam-driven merchant ships over the years until he came to Canada in 1913. As detailed in my blog post, the Wimborne wreck in 1910 would have been traumatic but it did not stop him from going back to work on ships.

I am sure there are many tales to be told of the voyages my great-grandfather was on. The one detailed in the Official Log Book for the Edinwen for 1905 was of particular interest.

The ship had many problems with crew members who were underexperienced or just plain incompetent. Right from the get-go they were forced to alter their planned trip from Newport (Cardiff) to South America and make an unscheduled stop at Falmouth because several firemen refused to work. Seven men were called by the Captain to explain their actions. Their explanations about potentially dangerous equipment and conditions were found baseless. The men were eventually charged and convicted, basically for dereliction, and sentenced to 14 days of incarceration.

That would not be the end of the troubles, though.

The log book has many entries about sailors being “under the influence of drink,” acting disorderly, or “absent without cause.” Many were arrested while in South American ports. Some were let go from the ship’s crew. One man actually fell from a ladder coming on board one night while “very drunk” and was drowned.

The event that involved my great-grandfather occurred on 20 February 1905 while in the port at La Plata, Argentina. Four men, all in a state of inebriation and full of anger, accosted the 1st Mate and Captain, demanding money. According to the Captain’s log entry, “these men were shouting & trying to push their way into the Salon saying they would drag the B….. meaning me from his bunk . . . as soon as I went on deck they crowded around me demanding money in most defiant & threatening manner . . . 2 men J. S---- & J. C---- laid their hands on me and assaulted me afterwards they went on the main deck both abusing me but J. S---- being the worst of the two using the most low insulting language & shouting come down you f….. we will fight or f… you. I therefore sent the Mate for policemen and had these men arrested. The language used toward me is not worthy to defile this log book with.”

Two of miscreants on a previous day reportedly “took charge of the Galley driving the Cook out afterward came aft & created a disturbance on the poop wanting to go down to the cabin to get hold of the Steward [my great-grandfather] who they said they [would] kill. I quieted them down & pacified the Steward not to bring the charge against them but now after yesterday’s occurrence the Steward pleads that he is frightened of his life with these men after having been threatened by them. So I also charge J. S---- and J. C--- with assault.”

The Captain, 1st and 2nd Mates, 1st Engineer and Steward all signed the statement in the log.

None of the men appeared to have been jailed but the vessel was quickly rid of them.

I can imagine how Great-grandpa James probably stood up to the gang but glad he survived unscathed.

Just another day at sea! 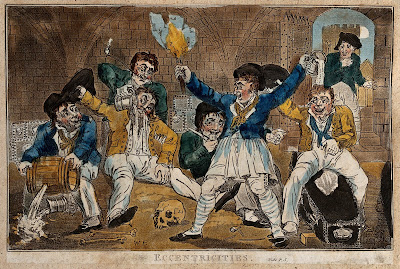 Posted by Discover Genealogy at 10:10 No comments: