School Curriculums of the Past

Anyway, it got me thinking about what children are taught today versus what was in the curriculum a century or more in the past.

Our system in Canada is based largely on the models developed in Britain, modified to fit our unique nationalism and geography, of course. In England, the modern, nationally-based educational system really only dates back to the latter part of the 19th century.

It developed gradually due to pressures from the middle class who saw education and formal training, outside of apprenticeships, as being mandatory to secure the future of their children. Compulsory apprenticeship was abolished in 1814. Previously, schools, particularly higher grades were available only to the well off. Child labour was still common well into the late 1800s as working-class families needed the extra revenue from their children’s jobs to sustain them.

Religious differences also played a role in the building of a consensus regarding public education as various groups sought to have their own beliefs included as part of the curriculums being taught to their children. The established Church of England in many ways controlled schooling through enrollment to accreditation of teachers.

The Education Act of 1870 (Forster Act) established the national, nondenominational, education system, running parallel with private schools which usually aligned with specific religious groups. School attendance was made compulsory to age 10 years. In 1893 that was raised to 11 years, and later to 13.

The basic curriculum in the 18th century involved teaching children to read and then to learn the catechism. Some schools included Latin and Greek classes, as they related to Biblical writings. In 1840 the Grammar Schools Act resulted in the addition of science and literature courses.

A National Curriculum, prescribing what was to be taught in the government-sponsored schools, was not introduced until 1988. It has two objectives: “to provide opportunities for all pupils to learn and to achieve”; and “to promote pupils' spiritual, moral, social and cultural development and prepare all pupils for the opportunities, responsibilities and experiences of life.”

The current National Curriculum consists of: 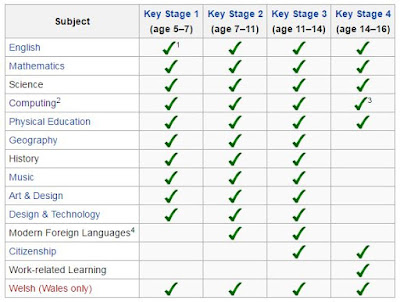 1 English is not statutory in Key Stage 1 in Welsh-medium schools in Wales
2 New Computing curriculum replaced Information and Communication Technology (ICT) in schools (computing is now counted as a science in EBACC).
3 ICT is not statutory at KS4 in Wales or Northern Ireland.
4 Simply "Foreign Languages" at KS2.

The addition of Computing as a major course of study is certainly indicative of the modern world. What might be of concern is the absence of the subject of History for older age groups as well as any emphasis on music and the arts.

To get back to Canada – over the past century our educational system has developed and expanded to match the technology and demands of our society.

I thought it would be interesting to compare the high school curriculums, if not the actual marks, in schools members of my family attended over several generations. It would tell us how (well) we were/are educated as well as what we were/are good at.

My father excelled in math and science. Being educated in a rural school he took subjects that dealt with the local environment such as agriculture that we city kids never knew about. He was an average to an above average student in History, English and French. The sheet below shows the province-wide subject list, however, many options were not offered in the country schools. He went on to a technical school instead of finishing grade 12. 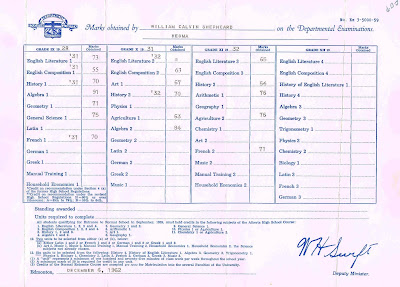 My final reports cards in high school, in fact pretty much all through school, were letter graded, except for the final marks based on written, province-wide, departmental examinations: basically starting at Ds for abject failure (below 40%) and moving up to As for exceptional work (65% to 79%) and Hs (80% or higher) for honours achievements.

By the time I was in high school (30 years after my father), in the city, we had options for music and typing. Physical Education was also emphasized. My marks paralleled my Dad’s, with my strengths also in Math and Science.

Our son, according to one teacher in grade 10, was “a natural athlete with a super attitude.” He got the attitude from his mother! He was also educated from Kindergarten through grade 12 in French Immersion, meaning he took all his courses, except for English, in the French language. We thought that particular program was exceptional in the public system and we also believed being fluent in a second language would be of great benefit to him down the road. And it was!

His marks were much like mine and my father’s, with a talent for Math and Science as well, and having a little less interest in the Arts and Social Sciences. He was, alas, never a musician but he did learn to dance. 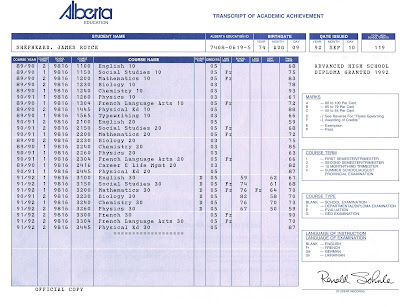 Our daughter also excelled at school and, again with better results in Math and Science. Curiously she did very well in Accounting courses but she would tell you today she understands little about the subject. 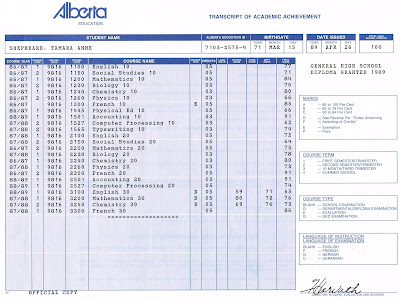 My grandchildren are super-sharp students. How could they be otherwise with this pedigree?

Only one has reached high school level, so we don’t have too much to compare with yet. His strengths lie in many areas: Music, Social Studies, English and Science but he does very well in Mathematics, French and Woodworking, another option available in today’s schools.

It’s hard to compare exactly what the content is in each of the subjects over the years. There has been much advancement in the sciences that schools have tried to keep up with. I know from hiring people and seeing current writing examples over the past few decades that the level of accomplishment in using the English language has declined. At the same time use and understanding of technology has increased significantly. My grandchildren have used devices for years that baffle us.

These are signs of the times, though, not measures of intellectual capacity. Had my father owned a computer in the 1930s, I am sure he would have been a whiz at using it. His post-secondary education at the Coyne Electrical School in 1936 (blog 24 March 2015) is evidence he understood the latest technology for his time.

Currently our local public school board says this about High School Success: “In the increasingly independent setting of high school, students explore new ideas, develop additional interests, build relationships, and pursue their goals. All of our high schools work together to give students more flexibility in accessing various programs and courses across our system.” That’s pretty much what schools have always tried to do and be so it is not really all that helpful. What we hope and expect is that they will turn out well-rounded people capable of independent thinking.

What that seems to mean to many of us in the “older” generation is that they think the students can teach themselves and progress at their own rate – rather than always actually receive direct instruction from teachers. they seem to less insistent on getting feedback by way of assignments and exams that measure what they have learned. There is no doubt that the subject matter has grown exponentially but the goal of public education should be still to teach the basics of reading, writing and arithmetic, so that students learn to communicate and are able move forward with confidence in their field of choice.

For genealogists learning about how their ancestors were educated might go a long way to explaining their life choices, or controls. It’s worth investigating.

Wayne Shepheard is a volunteer with the Online Parish Clerk program in England, handling four parishes in Devon, England. He has published a number of articles about various aspects of genealogy in various family history society journals. Wayne also provides genealogical consulting services through his business, Family History Facilitated
Posted by Discover Genealogy at 08:29 No comments: