Checking out Families From the Past

It is often difficult to determine whether individuals from centuries ago are related. Sometimes we can assume relationships because succeeding families have children of the same forenames. In many countries there were, and are patterns of naming of children. So when we see a name that never appears again, we tend to think they are not part of our family.

The way in which genealogists tend to work is from the present day to the past – taking information about the people we know and working backwards. That is not so easy when we have no information about people we find on very old records. Chasing them forward is guesswork, especially if they were born and lived most of their lives before censuses were taken.

I have such a problem with my 3rd great-grandparents’ families – Thomas Mayfield and Eleanor Tunstall. They were married in Saint Clement Danes parish, in London, in 1804. Their first two children were baptized in St. James, Clerkenwell parish, also in London, in 1806.

For my 3rd great-grandfather, I was reasonably sure (from the work of many people and the documents we have assembled) he was born in England in the late 1700s, although the 1850 US census said Ireland. That census records he was 74 years old which puts his birth year around 1776. How do we know all that for sure, since that is the only census he has been found in, and the first in the US that has any details as to the origin of individuals.

Well, there was a biography written for one of his sons which said so. It stated Thomas Mayfield “was born in London, and was graduated from the London Medical College. He began practice in that city when thirty-two years old, but shortly afterward came to America, locating in Maryland. . .” He apparently sided with the Americans in the War of 1812. The biography went on to say Thomas’ father was a watchmaker in London by the name of William Mayfield and it also said Thomas died in 1869 at the age of 84. Those statements narrow down both Thomas’ birth and immigration years.

No one has yet found a death certificate or grave marker to confirm any of the details. We do know his wife, Eleanor died in Baltimore before 1834 (I have to get someone to see if they can find details of this event in the Maryland records.) when Thomas and at least some of his children moved to Indiana. Census records for his children, beginning in 1880 show his birth place as England.

Two men named Mayfield, who were watchmakers in London in the late 1700s, are shown on a published directory – John and Edward. But no one named William, at least on any index I have seen.

I went looking for a birth or baptism record for Thomas dated in the mid- to late-1770s and found some information that seemed to fit. Three Mayfield children were baptized in 1785, in London, including a Thomas, born in 1778. The father was named John and he was a watchmaker. The occupation is right. The date of birth is close. The mother’s name – Sarah – does not appear in any future generations, which is curious, but the name John does, as do the names of the other children baptized to these parents – Benjamin, William and Mary. We might at least be on the right track. One of Thomas’ sons was named John William, so it is possible the watchmaker named John had a second name, William, by which he was called. More supposition than fact, though! 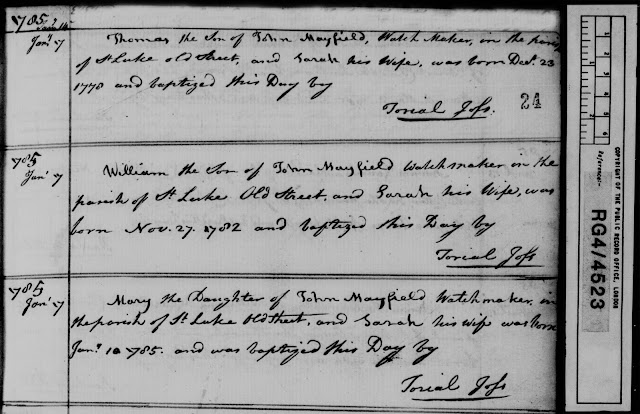 Can we accept all this information as indicating a familial connection? For now I have!

But I am afraid I may have to look over every Mayfield record for the time period, in London and possibly elsewhere to eventually confirm who my ancestors were. Unfortunately there is no one studying the name at the Guild of One Name Studies so I might be on my own here.

The Tunstall line is a different and even more difficult story, one that I will comment on in a later post.

Wayne Shepheard is a volunteer with the Online Parish Clerk program in England, handling four parishes in Devon, England. He has published a number of articles about various aspects of genealogy and is the Editor of Relatively Speaking, the quarterly journal of the Alberta Genealogical Society. Wayne also provides genealogical consulting services through his business, Family History Facilitated.
Posted by Discover Genealogy at 09:11 No comments: