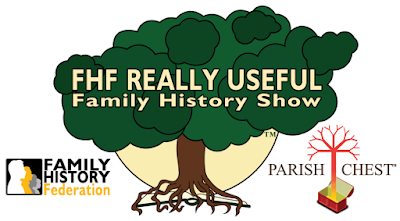 Over 20 speakers have been booked to present talks on a wide variety of family history-related subjects. See the list of speakers here. And check back regularly as more are added.

They have an Ask the Experts page set up where you can arranged to get “advice across a wide range of family history disciplines” from specialist and professional genealogists.

Information about how to register can be found here.

It’s a REALLY GOOD DEAL! at just £10 for the full day (under Cdn$18 right now). Talks will be viewable for up to seven days after the event for those registered (in case you get called away for lunch and miss one).

Posted by Discover Genealogy at 10:42 No comments:

Family History Down Under 2021

I am presenting a talk at FHDU 2021 in March

This will be a 4 day / 4 track conference. There will be six webinar presentations each day — 24 in all – plus a further 50 as recordings for a total of 70 presentations in all. They will be available to view online for up to 3 months.

An innovative and enhanced event

There is maximum flexibility to participate.

·         Digital hubs (exclusive Facebook groups) — four exclusive digital hubs, one for each track theme. Interact with speakers and other experts (an extended Q&A) — and other attendees generally

Check out the latest

The website is constantly being updated. Have a look at the topics and speakers already set: 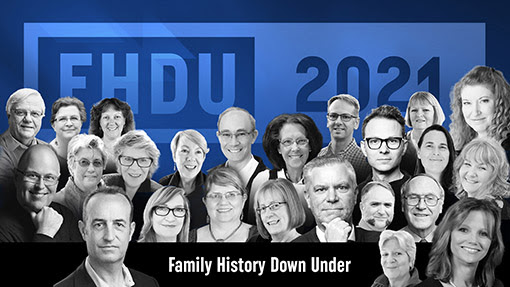 Posted by Discover Genealogy at 06:31 No comments:

My 3rd great-grandparents, Thomas and Mary (Smith) Pearson, moved to Leamington Spa, Warwickshire, sometime before 1851. They are shown on the 1851 census living on Leam Terrace East in Leamington, running the Railway Tavern. They likely would have lived upstairs in the same building. In 1841 there were still in Tile Cross, Sheldon parish, Warwickshire, running a pub there called the White Hart.

Thomas was a victualer for much of his adult life. He is shown on government records from 1823 through 1828 leasing and operating the White Hart. That tavern was built in the 17th century and is still going. The 1829 baptism entry for his son records his occupation as a victualer in Tile Cross.

At the time of their move to Leamington Spa, the town appears to have been going through a major development. Thomas and Mary probably thought there was an opportunity for improving their lives through relocation. As one follows the census records it is apparent the residents of Leam Terrace, and presumably the whole of Leamington Spa, grew in number from 1851 through 1911. They also aged.

Until recently, I thought I knew the location of the home they occupied in Leamington for many decades, but I was never entirely certain. A photo of their home in Leamington gave me a strong clue but until now I had not fully confirmed where it was located.

I am not sure how long Thomas operated the tavern in Leamington Spa. By 1861 he was working as a baker. One may presume that business was at the location across the street from the pub, now called the New Inn, however the census does not record building numbers. In 1871, widow Mary Pearson was recorded as a baker as was her son, Charles. While maintaining different residences, they may still have been working together in the same shop.

In many documents produced during the 1880s for both Thomas and Charles, their prime residence was at #58 Leam Terrace East. So, what could be simpler than looking up the address? Well, lots as it turns out. The early censuses did not record building numbers. The later ones had entirely different numbers. And those of today are different again. The exterior of many houses has also changed over time.

To sort out the neigbourhood, I had to look through the lists noting street intersections, large versus small residences, unique terrace names and backstreet enclaves. I matched up names of neighbours, to get an idea of who lived where for long periods of time in the same house.

I few landmarks, such as the New Inn, which appears to be the name of the what was the Railway Tavern, helped me identify building numbers over the latter part of the 19th century and early part of the 20th. The old Pearson residence at #58 Leam Terrace East is now #166 Leam Terrace. There is no “East” designation anymore. The last renumbering appears to have taken place between 1901 and 1911.

Eventually Charles took over the bakery business. He had taken his wife and first child to Australia in 1853, at the start of the gold rush in the State of Victoria. They had four children while living down under and lost two, including the daughter that had accompanied them. On board the ship on their way home in 1861 another child was born. Back in Leamington they had four more, one them my great-grandmother, Mary Elizabeth.

I believe Charles was actually asked to come home by his mother after the death of his father, Thomas, who died in August 1861. He was their only child and she would have needed his help and support. Charles and his family were on their way back to England in December. Upon their arrival they moved into one of the properties owned by Thomas and Mary, called the Pearson Buildings or Cottages.

On the 1881 census, Mary Pearson, by then a widow, was living at #60 Leam Terrace East (now #168) and shown as a coal dealer. By the time of her death in 1884 she had moved back next door to the familiar #58. The 1871 census records Mary at #12, indicating that the houses were re-numbered prior to 1881. It was likely after 1876 as the Kelly’s Directory for that year showed her operating out of #12. Curiously on the 1881 census, an Elizabeth Rowlands is shown living at #58 and indicated to be a “baker’s wife.” Earlier censuses, however, showed her as a widow. It is probably that she was running the bakery for Mary Pearson, by then aged 85.

Luckily, for me at least, most of the buildings that were there in the 1880s, are still standing so I was able to compare an old photo with the modern Google Street View. Old ordnance maps of the town proved very useful in illustrating the buildings present in the mid 1800s that could then be compared with current street plans.

So, why is this all important. Well, my grandfather, James Pearson Shepheard, lived with his grandparents, Charles and Susannah, after the death of his mother, Mary Elizabeth (Pearson) Shepheard, in 1891, until he was about five years old. He was only six months old when Mary died of phthisis. His grandmother was with him and his mother when he was born and likely looked after both when Mary fell ill. Their residence was above the bakery, then operated by George Boswell who lived in #60. Boswell operated the bakery until his death in 1911. Grandpa Jimmy went to live with an uncle in Torquay, Devon, after the death of Susannah in 1896.

The photo of how the building looked was sent to my grandfather by his aunt, one of his mother’s sisters. On the back she wrote “Our old home the house you lived at until you was 5 years old. I had made new shop double fronts.” The photo accompanied a letter dated 1944 and the building pictured is numbered 166 and would therefore have been taken some time in the decades prior.

With a combination of photos, census records and other documents, I am confident I have been able to confirm the location of the Pearson home and the other properties they owned nearby.

Posted by Discover Genealogy at 10:57 3 comments: