What’s new with the Millers?

In a previous post, on 14 June 2021 (Miller Y-DNA: A minor break-through?), I discussed the results of Y-DNA tests and how they hopefully would lead to a breakthrough in finding where and when my 2nd great-grandfather, John Conrad Miller, originated and emigrated from Germany.

Since that post I have spent a great deal of time tracing back the ancestors of Richard Miller, whose DNA test matched Don’s in significant detail. I also took a Y-DNA course from Diahan Southard, at Your DNA Guide, that gave me a much better understanding of how to use these tests.

I have also made contact with members of the Association for Family Studies in Baden-Württemberg from who I hope to get some additional help in finding my direct ancestors.

To carry on from my last post about the Millers, here is what I know (or suspect) now.

Because I descend through a female, my Y-DNA test will not provide any results that can be correlated with John Conrad. So far, my atDNA tests have not shown any potential German roots that I can identify with him either.

As I indicated previously, I had the Y-DNA of a cousin, Donald Miller, a direct male descendent of John Conrad, tested a few years ago. There was only one match to my cousin Donald, a man named Richard Miller. They have a very close Y-DNA profile, so I am confident we are all related.

Both individuals also had atDNA tests, but there are no matches to each other on these results. I suspect that is because they are, at best, 5th cousins and that is too far apart to generally show familial connections using that type of DNA.

Richard had assembled some good information on his ancestors, at least as far back as his 3rd great-grandfather, David Műller, who emigrated from Germany with his family in 1831. Using that data, along with other information I have found on Ancestry.com, I have been able to piece together Richard’s ancestral roots with some confidence.

Richard and Donald, unfortunately, are the only two individuals that matched. It would really help if we could find other Műller/Miller descendants to do Y-DNA tests to see if, between them, we could narrow down the ancestral lines.

The two, family lines must connect through males as confirmed by the Y-DNA tests. The family line comparison chart (below) shows what we now know about our respective Műller/Miller male ancestors and how they may connect. 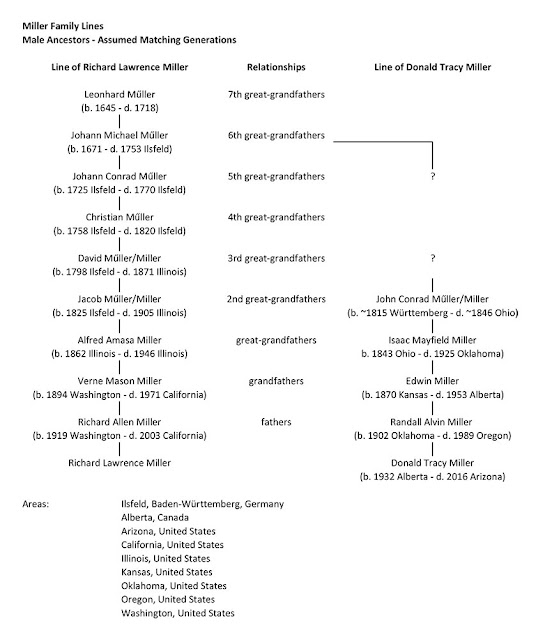 Some information about David Műller, his wife and his children on Ancestry trees is suspect or just wrong, but I did manage to correlate the names and dates with records from church records in Germany. The family were all born in Ilsfeld, Baden-Württemberg, which is about 20 miles north of Stuttgart. That fits nicely with the limited information I have on my John Conrad Miller.

Ancestry has an extensive collection of birth, marriage and death records from Ilsfeld, so I was able to find David’s family and trace his ancestry. I am unsure about the names or spelling of some of the women who married into the Műller line. Better interpretations of those names may help in establishing the complete family story.

The baptism entries of David’s children all indicate that they emigrated to “Amerika” in 1831. Below is part of the baptism record, with the note about emigration, for their oldest living child, Christian Friederich, who was born in 1821.

I did find a passenger list that appears to show them and confirms the date. The ages of the children and the order of their births does not quite fit with what the church records show, but that could be a problem of those in charge in putting together the passenger manifest.

David and Dorothea had five children according to the Ilsfeld birth register. Their first son died at five months of age. The other four accompanied David and Dora to the United States. Their daughter, however, died on board ship during the voyage. The three remaining sons all married and had families after they settled in Illinois.

David’s parents were Christian Műller (1758-1820) and Regina Margaretha Weissbrod (1757-1810). They married in 1784 in Ilsfeld. Six children were born to them between 1786 and 1798, although only four reached adulthood and, of those, only one son, David. So, while David’s children were of a similar age to my John Conrad, they were not first cousins.

Christian’s parents were Johann Conrad Műller (1725-1770) and Christina Dorothea Ehrenfeld (1722-1788), who married in Ilsfeld in 1748. Both were born there as well. They had four children between 1751 and 1758. One of Christian’s brothers, Johann Adam, also married and had a family in Ilsfeld, including three sons. Only one of his sons, also named Johann Adam, reached adulthood. Johann Adam Junior’s sons were named Johann Michael (b. 1809) and Johann David (b. 1814). Johann David immigrated to the US but not until 1839, according to the note on his baptism record. It does not appear he had any other sons so they are not close cousins to my John Conrad.

There is a death record for a Johann Michael in Ilsfeld in 1753 that also stated he was 82 years and three months old. From that information I found what I think was his birth record in 1671. That is partly confirmed as the date of his death in recorded with the birth entry.

Johann Michael had married another woman prior to Anna Elisabetha. The first wife would have died before 1725, probably in Ilsfeld.

It appears we have to go back to at least Johann Michael Műller to find the connection and the split of family lines. There appears to be no birth register for Ilsfeld for years prior to 1660, and no marriage or death registers for years prior to 1716. That makes tracing families in the area more difficult.

It may be that a son from Johann Michael’s first marriage or a brother (son of Leonhard) is a direct ancestor of my 2nd great-grandfather.

There is no Johann Conrad Műller baptized, or at least whose baptism is registered in Ilsfeld between 1810 and 1820 which suggests he may have been born in another parish.

I think we are close to finding John Conrad’s direct ancestors but there is still work to be done. 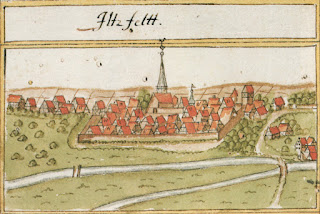 Posted by Discover Genealogy at 12:48