I received one of those funny but inspirational stories from a friend this week. It was titled Memories and was about someone of my generation explaining to a young person, things about their childhood. I am sure readers will have seen many similar messages with tales told by older generations meant to relate their different their experiences were to people much younger.

I am not sure where this particular story originated. I did find it on a post on a website called Little Things published on 13 July 2015, although I am not sure it was first posted there. Little Things is explained as being “a helpful hub that makes it easy for moms and families to spark joy in each other’s lives by sharing the special stuff that connects us.” It’s kind of like the missives from Erma Bombeck for those who remember her. There are a very large number of contributors to the Little Things posts.

As it happens, when I got the email, I was starting to write a blog post about home entertainment, such as the first TV our family ever had. I am still composing that one, but the email got me sidetracked and I decided to post this one first.

Anyway, the story in the email was about fast food. A child asked his father, “What was your favorite fast food when you were growing up?” And the father responded, “We didn’t have fast food when I was growing up. All the food was slow.” And it went on from there. You can read the whole thing on the Little Things website.

One sentence struck me and made me think about the lives of my own parents as well as other ancestors: “Some parents never owned their own house, wore jeans, set foot on a golf course, travelled out of the country or had a credit card.” Now, that is not totally true of my parents, except for the travelling part.

I thought further about that and realized that neither of my parents had ever travelled outside of North America. They both had family members who lived in various parts of Canada and the US and did visit with them occasionally. Apart from my father’s service in the Royal Canadian Air Force in WWII, during which time he was posted to many different bases in Canada, the furthest they ever travelled, at least for fun or vacation, was to California. Growing up, I did not think that was unusual. 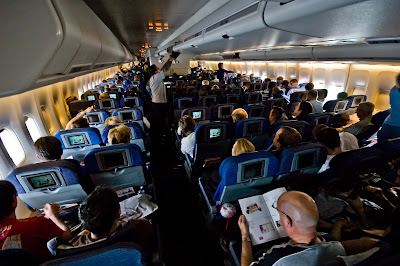 We arrived where we are, of course, because some of our ancestors came to Canada from their original homes primarily in the British Isles. My in-laws were from Scotland and they emigrated in the 1920s. They went back a few times in the 1960s to visit their families. My paternal grandfather, the first Shepheard to come over, arrived in 1907. Other ancestors arrived in North America from England, Scotland and Germany in the early part of the 19th century. These, of course, were not pleasure trips but voyages of necessity taken to find better lives.

To get back to foreign travel, I might have been the first person in my immediate family to travel outside of North America. I was one of the Boy Scouts in Calgary to be selected to go to the World Jamboree in Greece in 1963. I was 17 at the time. My wife also travelled as a young person (aged 12) when she accompanied her mother to England, Scotland, Ireland, Germany and Italy to visit families in 1961.

Over the years, we have flown to many different locations in Canada and the US for business and pleasure. Foreign vacations, while infrequent, have not been something strange for us. Our children have all flown to many places now, although our oldest has also not yet been away from North America.

Internationally we have been on trips to Australia, Belgium, China, Cuba, England, France, Greece, Indonesia, the Netherlands, the Philippines, Scotland, South Korea, and Taiwan – although some of them were only for a day or so as part of a more extensive tour.

All that makes it sound like we are real jetsetters but that would be a stretch. We have been very lucky to be able to visit family and friends in many of these places.

Our children and grandchildren are much more attuned to travel that we were and certainly what our parents were. The world has grown smaller through each generation. A few hundred years ago, travelling across a parish or county was counted as a major trip. As time progressed and necessity prevailed, people moved around mainly for work, mostly locally, until leaving a country became necessary to prosper or even survive.

What travel we have been involved with is a lot different than that of our ancestors. They were intent on finding new lives and opportunities. Many of them were likely part of a general migration.

The purpose of one of our trips was to see the areas where our ancestors had lived. What we could not learn was what the conditions were that had made them decide to venture across the world.

I have written and talked a lot about whether such moves were the result of Mother Nature’s intrusion into lives and livelihoods. Did the physical environment change to the extent that making a living or obtaining enough food were made too difficult? One of my talks, available to listen to is on the Legacy Family Tree Webinars website. 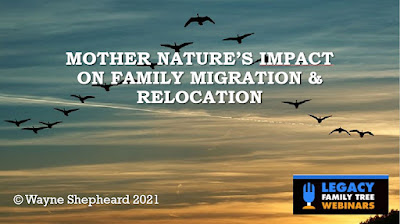 We still have a list of places we would like to visit, some of them again. Most are for our own interest although it is always great to see and learn about places where past family members have originated. Hopefully we will be able to get on the road or in the air once this current “plague” is done.

Posted by Discover Genealogy at 06:54 No comments: