The Old Rocking Chair’s Got Me

One of the pieces of old furniture we have in our house is a rocking chair that was once owned by friends and neighbours of my wife’s parents. Although not part of Linda’s family’s mementoes directly, it still has special meaning to her as a remembrance of her childhood. 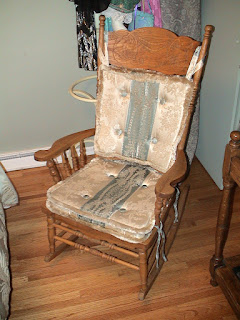 As you read this, have a listen to that old song, Old Rocking Chair's Got Me, composed by Hoagy Carmichael. The song has been performed by many great artists over the years since it was written in 1929.

Following are Linda’s thoughts about what the chair means to her:

When I was small, we used to visit with Jimmy Jack, Annie Trimmer and Lizzie (Elizabeth) Wilson. The three were brother and sisters and owned the house at 216-12th street jointly. They were great friends to my mom and dad from the time they both came to Canada. I think they met through The Scottish Canadian Club that held social events and formed a great community for new Scottish immigrants. They were a lot of help to my mom when my brothers and sister, Walter, Betty and George, were little. Times were tough during the Dirty Thirties and throughout the war when mom was left alone to raise three young kids.

My dad liked to go fly fishing and he would often take Jimmy with him along with my older brother Walter.

I was the last of five children in our family and we had no relatives living close to us all my parents’ relatives were in Scotland. So, I always knew these three, lovely people as Uncle Jimmy, Auntie Annie and Auntie Lizzie.

Our visits were usually on the weekend and mom and dad would have coffee and I was often trying to entertain myself on the old piano. I learned a couple of tunes and would play Loch Lomond, Twinkle Twinkle Little Star incessantly. Sometimes Jimmy Jack would get his fiddle out and play some Scottish songs and I would get to dance with my dad and sing the songs with everyone.

I also loved to rock (I still do!) and would sit on Lizzie’s old wooden rocking chair and sing at the top of my lungs...songs like Gramma’s Lye Soap and the flip side of that record, a stand-up routine about Little Bopeep called It’s In The Book [You can listen to both on this 1952 recording by Johnny Standley here.]. I knew all the words to both, which was particularly funny to all of them because it had been banned by the government of Alberta whose religious leaders somehow took offence to the tongue in cheek humour of the song.

The three siblings were getting on in years by the time I was a child, and I was always told that someday when they were gone that I would get the piano and the rocking chair. I never got the piano because Annie’s daughter decided it was worth some money. She promptly sold it and kept the money, but she didn’t want the old wooden, well-worn rocking chair, so I did get that!

I would often run errands for the old folks – to the corner store to get groceries like bread and milk or cigarettes and tobacco for Jimmy’s pipe and, of course, some candy or pop for me and my brother, Billy. Jimmy would go to his bedroom and put his hand into a hole in the wall and come out with a ten- or twenty-dollar bill. I was told they didn’t trust banks, so they hid their old age pension money in the wall of the bedroom. I don’t know if anyone knew just how much they had hidden but when one section was full, they apparently started another section. I’m sure the relatives must have found the bedroom money, but I was told that when the little house got sold the new owners were renovating and found money in the walls in every room and it was rumoured to have been over $100,000.

The rocking chair ended up for a short time in the home of Linda’s parents, but when her mother moved, it was brought to our home where it has been ever since. The chair has been spruced up. It was stripped and refinished by Linda and has new cushions. Most importantly, though, it is one of those pieces that evokes great memories of times, places and people now gone.