I was watching a period program on TV the other night and saw an old car that looked a lot like my first one. Very strangely, and disappointingly, in all of the thousands of photos and movies taken by my parents and me over the years, there is not a single one of that first vehicle. What male (perhaps female as well) does not have such a picture!

I had to go online to find a picture of a 1950 Austin like the one I owned. I don’t recall mine had the rear, chrome fender guard, but it was black and very similar to the one the one shown below. It had four doors just like this one, though. 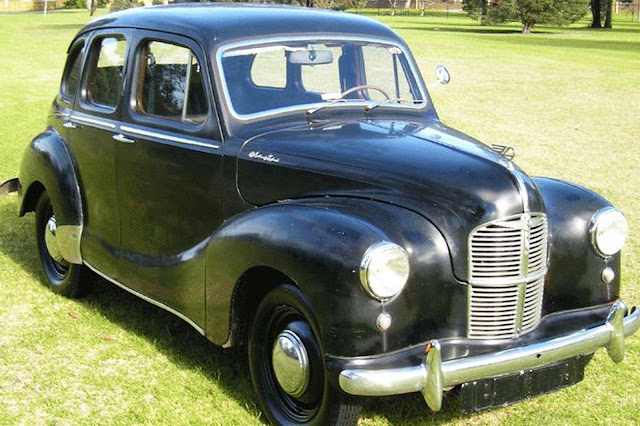 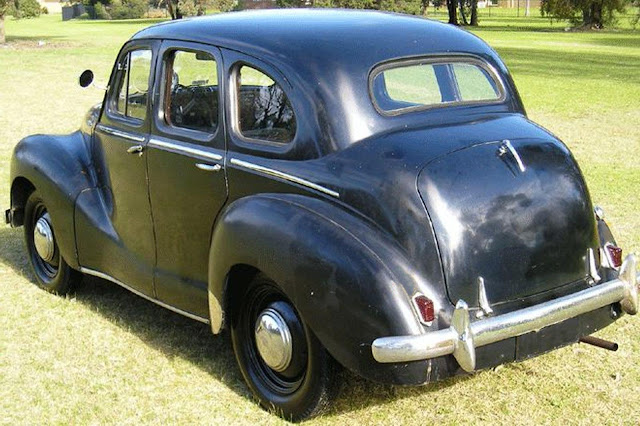 The signal indicators on my little Austin were arms that flipped out from between the doors. They were cute but the cold winter weather in Alberta often meant they would stick shut and you’d have to crank down a window and use your arm. Who remembers learning to signal that way? It was sometimes necessary to scrape frost from the inside of the windshield when the defrost heater could not keep up. The dashboard was fake-wood grain which was kind of classy. The seats were leather. It was a manual, stick-shift model and fun to drive.

As youngsters, most of us probably worked at odd jobs and saved money to buy our first car. My sister and her husband gave theirs to me (and bought another Austin) but it needed quite a bit of work. So a lot of the funds from working (and from parents of course) went toward repairs and maintenance. As with all old cars, the engine required attention as it burned more than a bit of oil. In this case that meant a total over-hall. My dad showed me how to do that. I had to strip the entire engine down and pull it out using a block and tackle. Austins of this time period had cast iron engine blocks and they were very heavy. Even pulling off the head was a task requiring some strength.

I remember doing the same head-gasket replacement on a Chrysler Simca some years later. I had braced myself over the engine, prepared to lift the presumed heavy part. I was expecting the same experience I had had with the old Austin. But it was made of an aluminum alloy and when I pulled hard to lift it off, it was so light I almost threw it through the hood!

Anyway, we took the engine block to a local machine shop and had the cylinders bored out. That meant replacing the piston rings with larger parts. I think I worked on almost every part of that engine, certainly finding out how things worked. I know I changed out brake shoes and had to put in a new clutch plate. The latter gave out when I was driving downtown and had to come all the way home speed-shifting without the use of a clutch. Readers who know something about stick-shifts will appreciate how this is done.

I learned a lot during this physically-challenging, mentally-frustrating and knuckle-bashing exercise, probably including some really bad language. It was character-building but reinforced my desire to never be an auto-mechanic.

I drove the car for a few years. It did the job for me. I don’t remember why I traded it for the Simca although that was a neat car, too. I am sorry I have no pictures of it either. I often wonder what it would be like to have an old Austin like this again to run around it. With its small size you could certainly park it anywhere and it had lots of room for passengers.

We don’t usually think of cars and trucks as being part of genealogy, but if you think about it, they are every bit a part of family history as a house, or an antique table, or even a vintage milk can such as I have sitting in front of me right now that belonged to my grandfather. Driving has been part of families for over a hundred years. There are many photos in our albums of individuals and family groups posing with their old cars and trucks – except for my first one!

We have seen major developments in style, components and reliability over the decades. It became goals for most families to have a house and a car, especially in North America where great distances had to be covered for work and leisure. Vacations were often designed around driving. Our families had many different makes and models to choose from. Their diversity and the use to which we put our cars are very much a part of our family history.

Getting your very first car is one of the important stages in growing up. I had not thought about mine for a long time but memories of it readily came back as I started to write this.
Posted by Discover Genealogy at 11:31 No comments: