I remember the ride in an ambulance to the Isolation Hospital in Calgary when I was just five. I had contracted Scarlet Fever and, at that time, patients with the disease were quarantined and hospitalized. I actually don’t remember feeling sick although I must have been enough that it worried my mother.

The ambulance ride was the only one I have ever had so it was quite exciting at the time. I believe I asked if the siren could be turned on but I seem to recall they said they were not supposed to for this kind of non-emergency trip.

The Isolation Hospital was Calgary’s second General Hospital, the cornerstone for which was laid in 1894. It initially had only 35 beds, a nursing school and an operating room. Several additions were made to the structure in later years. 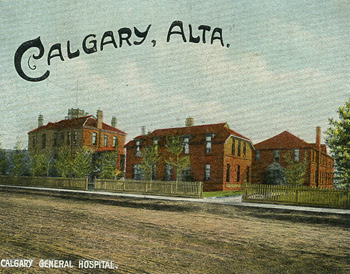 It operated into the 1950s and was finally demolished in 1973. What is left now are parts of some of the walls left sitting in a park. 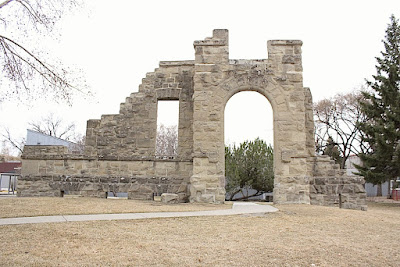 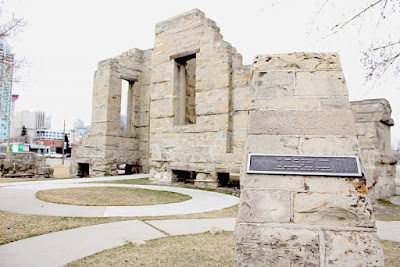 Childhood diseases were something that was very common in the forties and fifties. Almost all my school-mates got measles, mumps and other assorted other illnesses. They were just part of kids developing their immune systems. I’m sure some children got seriously sick but I do not recall any that I knew suffering badly. Curiously I got chicken pox from a nurse in the hospital, so I went home with some other malady than what I had been admitted for.

In my genealogical investigations I have come across many deaths of children in the 18th and 19th centuries from diseases that we might have called normal. The differences in mortality were likely as much to do with lack of medical help and unhygienic conditions as the diseases themselves. But such maladies were indeed serious and epidemics often cut a wide swath through communities, especially attacking the young. 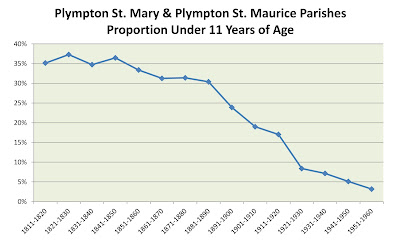 What great progress was made with the development of vaccines and other medical treatments. Diseases like measles that we used to be unafraid of have virtually been eradicated although it appears to be making a comeback in places due to the inattention of some parents toward inoculations. The Centers for Disease Control and Prevention in the US reports that “In the decade before 1963 when a vaccine became available, nearly all children got measles by the time they were 15 years of age. It is estimated 3 to 4 million people in the United States were infected each year. Also each year an estimated 400 to 500 people died, 48,000 were hospitalized, and 4,000 suffered encephalitis (swelling of the brain) from measles.”

Diseases, childhood or otherwise, are part of the history of families. Genealogists will come across all manner of infections in their search for information about their ancestors. Some instances will be of mild sicknesses; others might involve plagues that spread across the old world.

My own experience with Scarlet Fever remains part of my childhood memories, not because I remember feeling very ill but mostly because of the fun and special care I had in the hospital. It was one of the first very big events in my life. Curiously I found out from my father’s military records which I obtained a couple of years ago, that he also had Scarlet Fever just a few years before I was born.

Part of my memories was of the trolley cars that passed in front of the hospital on a regular basis. The year that I was sick was also the time when the old electric streetcars were being taken out of service. I think that many of them that trundled along outside the hospital were actually on their way to the Ogden yards where they were eventually scrapped.

Wayne Shepheard is a volunteer with the Online Parish Clerk program in England, handling four parishes in Devon, England. He has published a number of articles about various aspects of genealogy in several family history society journals. He has also served as an editor of two such publications. Wayne provides genealogical consulting services through his business, Family History Facilitated.
Posted by Discover Genealogy at 15:33 No comments: