Information About the Past from Melting Glaciers

During the past few decades melting glaciers have provided a window into the past, revealing habitations long lost under ice. What is also coming to light is that climatic conditions existed over a thousand years ago that produced temperatures at least as warm as present day. Of course, during that Medieval Warm Period, there was no human activity producing carbon dioxide that could have contributed to any warming or the cooling during the Little Ice Age that followed.

Retreating glaciers have yielded many sites of human activity, even the remains of humans themselves that had lived and died before the glaciers formed.

One of the most impressive finds was the mummified body of Ötzi the Iceman, whose remains were discovered in 1991 in the Ötztal Alps on the border between Austria and Italy. He is believed to have lived more than 5,000 years ago. An arrowhead buried in his shoulder, together with other wounds and blood stains from other humans on his clothing, have led to the interpretation that his death was a result of a fight.

Ötzi’s DNA indicates he may have been part of the migration of early European farmers who migrated from Anatolia to southern Europe in large numbers during the 7th millennium BC.

For more information see Otzi the Iceman from the Alps. 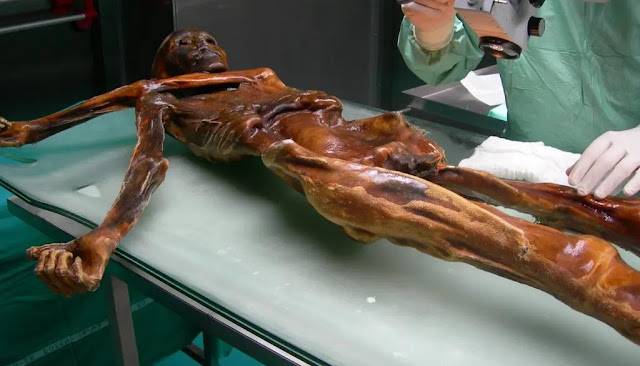 One of the most important things that are revealed by melting glaciers is the evidence of a warmer climate that predated the buildup of ice that formed the glaciers. These environments were present within the time frame of genealogical research. There recent exposure allows us to see what living conditions were like prior to the advance of glaciers during the Little Ice Age.

Beneath the Mendenhall Glacier in Alaska are the remains of a verdant forest, with trees dated between 1,200 and 2,350 years in the past. It won’t be surprising to learn that the area basked in a much warmer climate centuries ago and would have been prime hunting territory for indigenous peoples. The find is not unlike other similar discoveries under other melting glaciers around the world. In this case these trees in growth position were encased in gravel protecting them from the scouring effects of the advancing glacier. 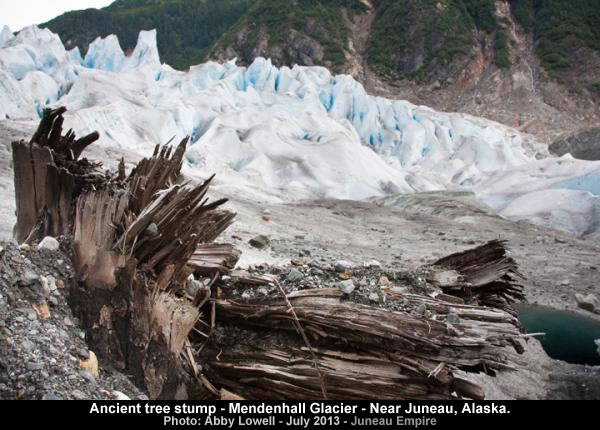 Mummified remains found in graves in the Zeleny Yar area in Siberia attest to a civilization that existed there between the 12th and 13th centuries. The bodies were wrapped in thick textiles, fur and tree bark and encased in copper plates. The wrapping and subsequent permafrost that formed during the Little Ice Age preserved the remains.

What we are witnessing is not the only time that mountain glaciers have expanded and then melted. Throughout much of the Dark Ages Cold Period (400-900AD) mountain glaciers and northern ice packs grew substantially. Then during the Medieval Warm Period they contracted, leading to the establishment of new societies such as those that lived in Zeleny Yar.

Materials and artifacts found with the human remains will eventually tell us more about the early society. Analyses of DNA extracted from the bodies will tell us where they may have originated. 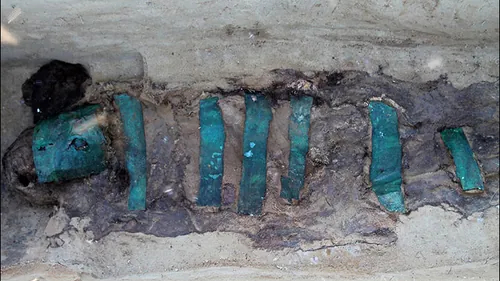 Lendbreen Pass is just one of dozens of locations in Norway where artifacts, and even an abandoned settlement have been discovered that demonstrate how people lived in the region during the centuries prior to the Little Ice Age. This and other passes were open to traffic during both the Roman Climate Optimum (250BC-400AD) and Medieval Warm Period (900-1300AD), as it is becoming so today.

The pass was used between 1,300 and 1,700 years ago (Roman Climate Optimum) and again around 1000 AD (Medieval Warm Period), at a time when trade was active across Scandinavia and Europe. It is also possible that local farmers used the pass to get to high pastures during the summer months. 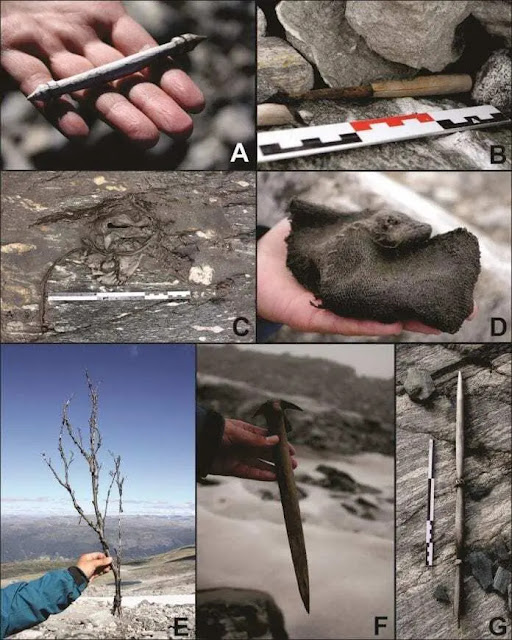 What these and many other examples demonstrate is that glaciers are ephemeral in relation to the history of the Earth. What we can observe today is a transition from a cold climatic period to a warm one. During the last 10,000 years, that kind of change has happened at least a half-dozen times. And, in the ancient past, humans often lived in much warmer times that we do now.

During the Little Ice Age, glaciers advanced in every mountain rage in the world. It should not be a surprise that they are now retreating as the Earth’s climatic cycle once again turns to warmer temperatures.

For genealogists, the importance of glaciers is not where they are today, that interest tourists, but where they were during the Little Ice Age when our ancestors lived, as they are direct indicators of climatic conditions.

Posted by Discover Genealogy at 08:51 No comments: