Read my recent article about natural phenomena and family history, in this case coastal margins, in the latest, April 2019 issue of Discover Your Ancestors periodical. In it you will learn about new lands were created along an major estuary in East Yorkshire, England, on which several families established farms. You can subscribe to the publication directly here. 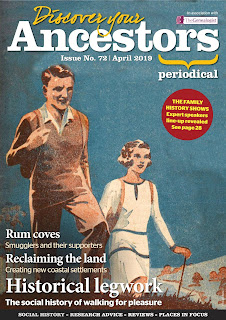 Families in Peril: The New Madrid Earthquakes of 1811-12

Read my latest article, Families in Peril: The New Madrid Earthquakes of 1811-12, in Going In-Depth magazine, published by The In-Depth Genealogist. In the article I discuss the disaster that impacted people and communities in Arkansas, Kentucky and Missouri between December 1811 and February 1812. Property damage was severe. Many families were forced to abandon their homes which were inundated by the Mississippi River waters as channels were shifted and flood-waters inundated farms and towns. You can subscribe to Going In-Depth or purchase back-issues here. 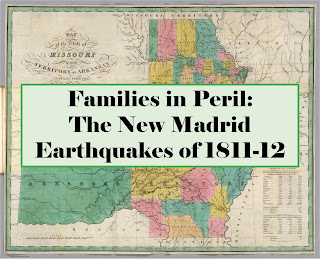 Posted by Discover Genealogy at 08:09 No comments:

A Visit to Vimy

Last month we had the pleasure of visiting our son’s family in Holland and experiencing some of the sights of northern Europe. It gave me an opportunity to see first-hand one of the areas where modern society developed and where people battled the conditions of the Little Ice Age.

One trip we made was with the grandchildren (and their parents, of course) to take in Eurodisney near Paris, France, travelling across Holland, Belgium and northeastern France. The route took us near several World War I cemeteries.

In November 2018 I wrote about a number of my wife’s family who fought in the last two world wars (Cooper Family Soldiers), including her Half-Uncle, Alexander Cooper (1895-1916). Alexander was part of the Cameroons Scottish Rifles, and was killed in action in northern France. We made a stop at the Bethune Town Cemetery where his body was interred. The side-trip allowed our grandchildren to see where many young men who had fought for the allied forces over 100 years ago were buried. They learned a bit of history of the conflict, the region and our family.

The picture here (on the left) is one taken by our granddaughter of her grandmother alongside Private Cooper’s head stone. 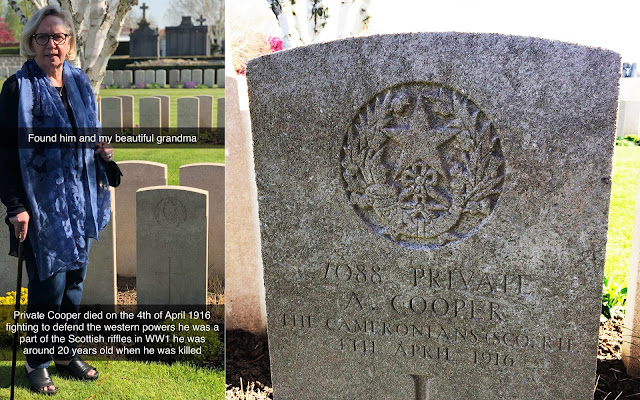 Further along the way to Disneyland Paris, we passed by Vimy Ridge and decided it was important to see the memorial to the thousands of Canadian soldiers who had fought and died in the many battles of the Great War in France. That is our granddaughter pictured with me in front of the Vimy memorial. 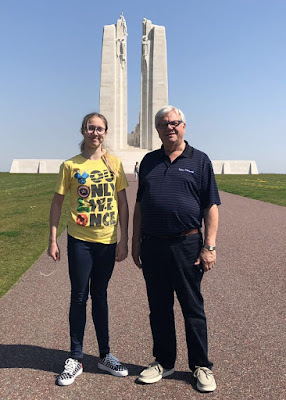 Four divisions of Canadian soldiers joined together (for the first time) to capture the high ground held by the Germans. It was a time that many believe Canada came into its own as a nation.

The battle began 9 April 1917 and ended with the capture of the ridge four days later. It came with a terrible cost of 3,598 Canadian soldiers killed and another 7,000 injured.

This magnificent memorial on the ridge was built on the highest point, on lands ceded to Canada by France in 1922, in tribute to the more than 54,000 Canadian men and women who gave their lives in France and Belgium between 1915 and 1918. It was dedicated at a ceremony on 26 July 1936. The names of 11,285 Canadian soldiers are inscribed on the ramparts of the memorial for those whose bodies were never found.

One name that were curious about was E. B. Shepheard (center of photo below), for obvious reasons. I was not aware of any members of my Shepheard line who fought during the Great War, but as a family historian I thought it important to try to find more about this man with whom we shared a surname. 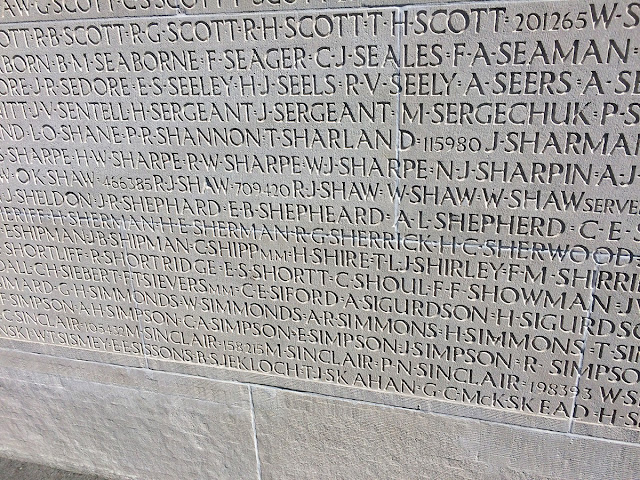 The Canadian War Graves Commission has a website where the names soldiers of past conflicts can be found. I quickly found that E. B. Shepheard was Edwin Baker Shepheard, a private in the 31st Battalion of the Canadian Infantry, service number 80236. He died 27 September 1916. 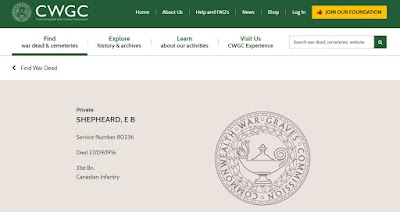 The World War I military records of members of the Canadian Expeditionary Force have all been digitized now and can be searched on the Library and Archives website. My search of these records, along with a review of information on Ancestry and FindMyPast databases gave me significant detail about this young man’s short life,

Firstly, Edwin was not related to our family, at least back as far as I have been able to find records. He was born in Modbury parish, Devon, England, on 22 December 1889. He was baptized there on 30 May 1890. His parents were William Charles and Sarah (Richards) Shepheard. Edwin was the fourth of five children. Modbury is a parish where there were many Shepheard families, but I have not yet found a confirmed connection with our line who came from Cornwood parish, also in Devon. There may well be a connection, but it will likely be in records from the 16th and 17th centuries, if they can be found.

He trained as an ironmonger in Modbury and can be found on the 1891, 1901 and 1911 censuses. He immigrated to Canada, arriving on 10 April 1913 on the ship, Sicilian. He made his way to Calgary (coincidentally, as that is where we live) after landing at St. John's, Newfoundland.

He joined the Canadian Infantry in Calgary on 12 April 1915. His full, service record shows the details of his attestation, postings and other personal information. His unit sailed for England on 17 May 1915 aboard the SS Northland. After a few months training at Otterpool and St. Martin’s Plain camps in Kent, England, his group embarked for France on 18 September 1915. 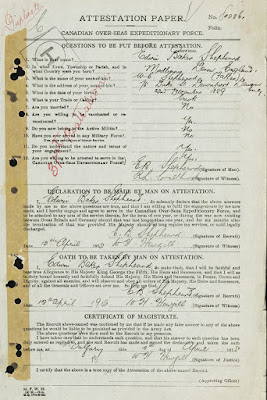 By May 1916. Edwin was based at Couval Depot near Etaples, France, and from there sent into action in the field. He was reported missing on 27 September 1916. There is a report from a non-commissioned soldier in his company on the same day about his death near Courcelette, France, about 28 miles southwest of Vimy. Since his name was included on the Vimy memorial, it would appear his body was not found. It may be that another bomb fell on his location before stretcher bearers could reach him.

We did not have time to tour the entire Vimy site but did get a strong impression of what the ground must have looked like (minus all vegetation) from the trenches and bomb craters still preserved in the area.

The memorial is an imposing and impressive structure and one cannot help but feel how sacred it is in recognizing the sacrifices made by all those who fought and died near Vimy and in the many other battlegrounds of France and Belgium. Anyone who has the opportunity to visit the area should do so.

There are 11,284 other stories of men named on the Vimy Memorial, besides that of Edwin Baker Shepheard. Wouldn’t it be neat if we could discover all of them?

Posted by Discover Genealogy at 08:36 No comments: