As part of my talk about Stormy Weather, I mention one of the earliest tempests to be recorded, that being the Great Deluge. This is the story of Noah and the presumed flood brought by God as punishment for man’s sins and one of the earliest records of mass migration of people caused by natural events

Myths have fed the imaginations of humans for thousands of years even though most of these tales are just unverified stories people have handed down through the ages. But a few may have roots in real natural events of the past. Among the most famous, perhaps, is the story of Noah and the Great Flood.

Similar versions of the story have been found in many parts of the world and recorded by people of many societies. There may be a reason for that.

Such a flood did occur around 7,600 years ago in the region of Euxine Lake, the predecessor of the Black Sea. The flood history is documented in the 1998 book Noah’s Flood, by earth scientists, William Ryan and Walter Pitman. 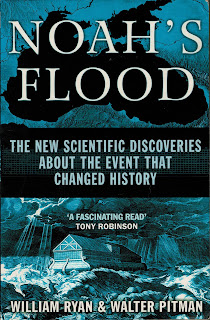 The lake had existed for millennia since the end of last ice Age having been filled by the outflow of water from the melting northern ice cap. For many hundreds, perhaps thousands of years before the event people had populated its shorelines and the fertile valleys along its margins, before civilizations prospered in Mesopotamia.

The region was flooded by water pouring in through the Bosporus Strait at Istanbul, which had been opened into the Mediterranean Sea. Scientists have estimated that during the flood the water level rose about six inches per day. Along the flatter areas of the shoreline, the edge of the lake would have advanced about a quarter of a mile per day. Over 60,000 square miles were swallowed in less than a year. The result was the ultimate formation of the Black Sea. 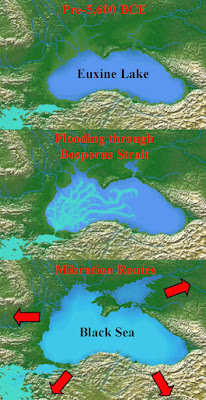 The inhabitants were forced away from their homes and scattered across the Middle East, Eastern Asia and Europe. Refugees from Euxine Lake took with them the story of the Great Flood. Some of them went south to the floodplains of the Tigris and Euphrates Rivers where new civilizations were being established: the Ubaid period about 5500 BCE (shortly after the flood); and the Sumer period around 4500 BCE.

The final breaking of the barrier on the eastern edge of the Sea of Marmora may have been the result of surging water and waves from major storms – so parts of the myth prevail in accounts of rain and flooding. The story of the Deluge has been passed down over generations in several cultures and religions, especially those whose history is linked to the Black Sea region.

One of the first modern publications about the Great Flood comes from the translation of 2nd millennium Mesopotamian clay tablets. George Smith, a British Archaeologist and Assyeriologist, published an English version in 1876, as The Chaldean Account of Genesis. It can be downloaded from Archive.org. 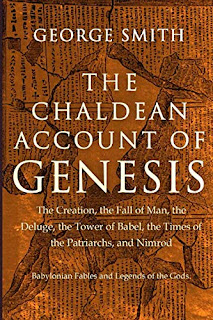 Genealogists who use DNA in their ancestral searches may see some parallels in the dating of branches that originated or passed through the Black Sea region around the time of the Great Flood. Who knows – perhaps some of them were related to Noah!

Posted by Discover Genealogy at 07:41 No comments: