Residential Schools in Canada: The death of families 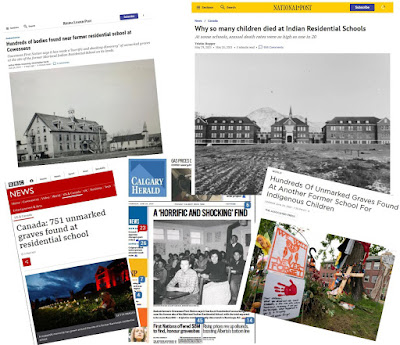 The Canadian federal government set up 139 such schools beginning in 1883. They were in operation for over a century with the last one finally closing in 1996. During that time, over 150,000 children were forcibly removed from their families and sent to live and learn in these schools, for the most part run by the Roman Catholic, Anglican and United churches. A map of Canada showing all of the residential schools follows. A breakdown by province can be found on the Truth and Reconciliation website. 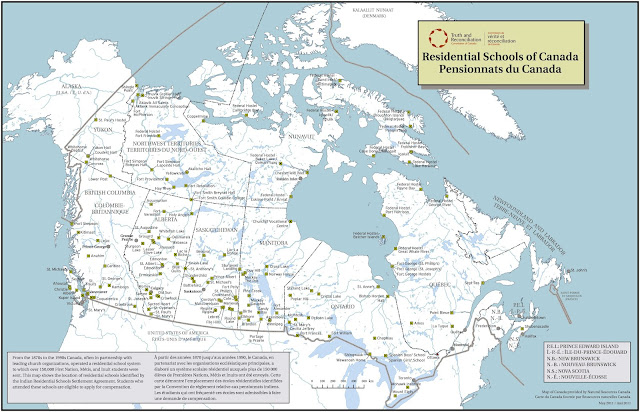 The formation and existence of these institutions is a black mark on our history. They represent a process of genocide under which the governments hoped to eradicate the culture of Indigenous people by educating and training the children away from their parents and communities.

As James Daschuk states in his book, Clearing the Plains (published by University of Regina Press, originally in 2013, new edition in 2019), they had already achieved a remarkable step through subjugation and confinement on limited lands. In the introduction to the 2019 edition, writer, historian activist and public speaker Niigaanwewidam James Sinclair says,

Canada cleared the plains coldly and opportunistically, taking advantage of a famine caused by the exploitation of bison populations and the flooding of Nakota, Dakota, Nehiyawak, Niitsitapie, and Anishinaabe territories by settlers. Methodically, and while using draconian legislation regarding Indigenous peoples and starvation, Canadian leaders coerced First Nations leader into signing treaties and drove  their peoples onto reserves, establishing the circumstances and conditions in which Indigenous communities could be controlled and exterminated physically and ideologically from the national consciousness.

Harsh words! But depressingly it is true.

Growing up in the prairies during the 1950s and 1960s, we were never taught about these “schools” nor about the treatment of First Nations people. In almost all respects they were held to be second class citizens. I doubt that our parents or grandparents knew much about the system either. It is only during the last couple of decades that studies have been completed and reports finished that describe the conditions in the schools and on the reserves.

Hundreds of photos of children incarcerated (there is no other word) at the schools have been published. Most of them showed smiling children, all dressed the same and engaged attentively in classroom studies. The reality was quite different.

Licia Corbella wrote a recent column in the 24 June 2021 edition of the Calgary Herald describing some of the background which is particularly disturbing and invites readers to put themselves in the position that native families found themselves in:

One day, armed government officials come into the neighbourhood and forcibly remove every child without warning, including yours. No time for goodbyes or sage final words of advice from parent to child. No last minute “I love yous.”

Try as you might — despite all of the resources at your disposal — you can't find where your children have been taken. Your neighbours know as little as you do. You're told this is the law. It's for the best. Your children will be well educated.

You don't have to be a psychologist or psychiatrist to figure out what might happen to you and the other adults in those posh communities. Depression very quickly will take root as the will to live plummets. Family breakdown ensues. You start to self medicate with alcohol or drugs or both. Or maybe you just stop getting out of bed. Self-harm and suicides spike.

That's just for the adults.

Then put yourself into the shoes of the children. One day you're out with your father and grandpa on their trapping line, the next you're grabbed by strange men, thrown into a boat and taken far from home. One moment you're picking berries with your mom, the next you're hauled away by RCMP officers.

You are young and you don't understand what's going on. You cry for your mother and father. You're slapped and told to shut up. The place you're taken to cuts your long hair off. You're stripped naked, “deloused,” your clothes and any other possessions you have are taken away and burned. None of the adults in this faraway location speak your language. Indeed, many of the children who come from numerous other communities don't speak your language, either.

When you do see people you know who speak your language you're beaten for trying to communicate with them. When you start to understand the only language allowed to be spoken, you're told that your language isn't important and your culture is evil.

Like many congregate settings, when one person gets sick, everyone gets sick. Some of your young friends die from the flu, measles or tuberculosis. In some cases you're tasked with carrying your friend's body to a hole dug in the ground. Their body is covered with dirt, a few prayers are said over the mound but no grave marker is placed there.

You may be beaten. You may be sexually abused. There is some kindness and love, but it's doled out in minuscule amounts.

The food is not very nutritious. In some instances, you aren't given enough. It's part of a federal government experiment to see what will happen to children if you are underfed and denied nutrition.

You are just six years old when you arrive at the residential school. By the time you see your family again you're 16. Your parents are unrecognizable when you are dropped back “home.” If your parents and grandparents are still alive, they seem much older than the vague memory you have of them. There is no spark left in their eyes. They're lethargic and depressed. They drink now. They tell you how much they missed you, how sad they have been since you were stolen away by the government, how desperately they tried to find you. But you don't understand them because you no longer speak their language. You are strangers with the same blood.

This is the way that thousands of families were crippled and died. Several generations were impacted during the 160 years these schools were in operation: children being stripped away from family influences and growing up without parents; parents existing for years without learning the fate of their children; both groups eventually turning to alcohol and drugs in an effort to forget the experiences and trauma.

And children died by the thousands while in attendance at these schools, most often buried in unmarked graves. Among the causes of death were unchecked diseases (primarily tuberculosis), malnutrition and physical abuse.  The graves are only now being rediscovered, in spite of the fact that Indigenous communities told us for decades that they existed.

The treatment of children during their lives and even after their deaths was egregious. The Truth and Reconciliation Commission tried to discover what actually happened to the thousands of “missing” children. A summary of their conclusions are:

·         For just under one-third of these deaths (32%), the government and the schools did not record the name of the student who died.

·         For just under one-quarter of these deaths (23%), the government and the schools did not record the gender of the student who died.

·         Aboriginal children in residential schools died at a far higher rate than school aged children in the general population. [up to fives times higher]

·         For most of the history of the schools, the practice was not to send the bodies of students who died at schools to their home communities.

·         For the most part, the cemeteries that the Commission documented are abandoned, disused, and vulnerable to accidental disturbance.

·         The federal government never established an adequate set of standards and regulations to guarantee the health and safety of residential school students.

·         The federal government never adequately enforced the minimal standards and regulations that it did establish.

As an introspection, I compared photos of members of my family with those taken at the residential schools. Below, the top photo of the first pair shows my father and his cousins in the Keoma, Alberta area in 1926. The picture at the bottom is of children at the Kamloops, British Columbia residential school in 1931. The children in Keoma were all living at home and cared for by loving parents. The children at the Kamloops facility were separated from their families for years. One may wonder how many of those children shown in this photograph are now buried there? 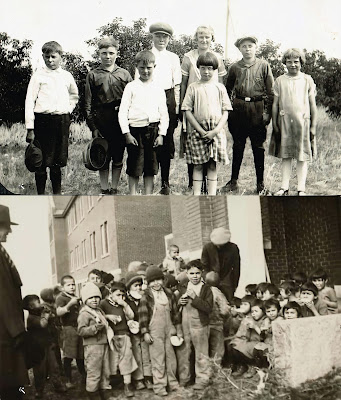 When I was at school, we had well-equipped woodworking shops at my junior high school in 1960 as shown in the top photo below. While Indigenous children may have been taught trades, often what went on was more child labour than training, as shown in the bottom photo of boys cutting wood at the Fort Resolution Residential School in the Northwest Territories. One major difference is that my friends and I went home after classes were out. 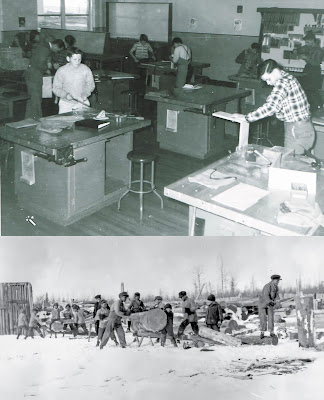 Had we known more, or had our parents or grandparents known about the conditions, could any of us have influenced the situation for the betterment of the children involved? I like to hope so. It could not have been a secret. There are thousands of photographs taken at these schools and innumerable reports published where we could have easily discovered them.

This whole disaster resulted in the death of families, one group exercising that power by taking away children, basically to “kill the Indian” in them. In reading about historical events, I would have said that these kinds of ideas and acts were something that would have been part of the ancient past, not part of modern societies. But that is wrong. In a civilized society, these events stand out as particularly odious as leaders should have known better and shown more moral courage.

There is still much to be done to assist in the healing process of First Nations people and the education of the rest of Canadians.

Have a look at the Truth and Reconciliation website, learn about the events that led us to where we are in this country concerning Indigenous people and see what you can do. 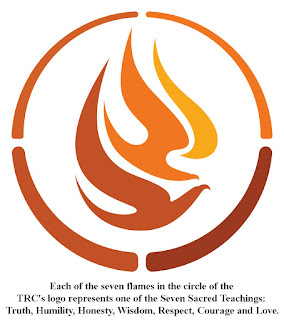 Posted by Discover Genealogy at 06:53