Finding the History of Some Ladies

I have recently done some work for a friend, Greg, tracing back his ancestors. What started with a task on uncovering the spelling changes of his surname, morphed into detailing his whole paternal ancestral lines.

I was happily and quickly working back until I got to one of his 3rd great-grandmothers. Now women are often difficult to trace because they traditionally, at least in most of the UK, take on their husband’s name.

The hunt started at Greg’s grandmother, Mary Edith Watkins. She was born in Swansea, Wales in 1903. She immigrated to Canada in 1925, to work as a servant for the family who had paid her passage. Edith’s father was Edward Daniel Watkins, confirmed on various records, and his father, Greg’s 2nd great-grandfather, was Hezekiah Watkins. I thought that unique name would be helpful in locating ancestors further back.

According to many records, Hezekiah was stated as being been born in Swansea, but the 1911 census said Merthyr (probably Merthyr Tydfil parish) and the 1901 census said Llanfabon/Llanvabon Parish. The censuses on which he was recorded were all consistent with a birth year of about 1842.

A search of data files on Ancestry and birth records on the General Record Office (GRO) website, led me first to an 1842 baptism in Llanvabon parish. The parents were Daniel and Mary Watkins and the family lived at Berthlwyd.

I found two other baptisms that also appeared to be for boys in the same family: Daniel was baptized in 1843 and Richard in 1847. The latter had a small mark next to it in the margin. I realized later that he was actually born in 1845 so the vicar had probably singled out this entry as being for a child rather than an infant. The occupation for Daniel, the father, was shown as collier. 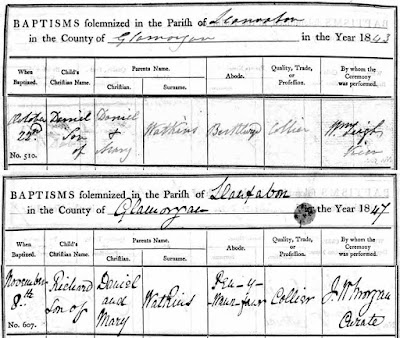 For Daniel, the family was still living at Berthlwyd but for Richard their abode was recorded as Pen-y-waun-fawr. That could have been near the Pen-y-waun-fawr coal pit or a farmstead named Pen-y-waun some miles to the west. A residence further away might make sense given the delayed baptism. The family may have had to wait until they were able to travel back to their “home” church for the baptism.

I then did a search for his birth on the GRO website. This is a great resource for searching for births and deaths. Once found, copies of the entries can be directly ordered as paper or PDF versions. Just fill out the form with as much information as you may have and hit the “Search” button. The search results will also show the mother’s maiden name which is very helpful in differentiating between children.

My search for Hezekiah with Similar Sounding Variations of his surname and Phonetically Similar Variations of his forename came up with a few entries registered in Merthyr Tydfil Registration District. The district includes Llanvabon parish, so I was on the right track. 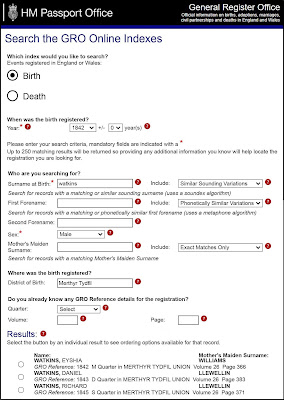 Hezekiah’s name was transcribed as Eyshia on the search results, but the actual record that I purchased showed Ezekia which was close enough to conclude this was the right person.

On this document his mother was recorded as “Mary Watkins late Evans formerly Williams.” That was an indication she had been married before, probably to a man with the surname Evans. Interestingly, many trees on Ancestry have Hezekiah’s mother as Mary Williams, so this kind of fit. I was in for a surprise here, though.

I looked for a marriage record for Daniel and Mary and came up with an 1840 union in Gelligaer District of Merthyr Tydfil Registration District.

There is a Berthlwyd not far from Gelligaer and Llanvabon, so the location of Hezekiah’s birthplace, and the baptism locations of he three boys, seemed to fit. There was also a Mount Pleasant in the same area which aligns with Mary’s residence on the marriage record. The document showed Daniel as a collier which fit and with Mary’s name as Evans, which also fit. A surprise was the name of her father, Robert Llewelyn, a mason. Now I had three last names for her.

I have found one Llewelyn family where many of the men were masons. They all lived in Newton Nottage parish, near Neath, Glamorganshire. A Robert Llewelyn and his wife, Mary, had a daughter named Mary, born about 1817. That seems to fit, and I will be looking at this family further.

I found a couple of marriages between a Mary Llewelyn and men with the surname Williams. There were also deaths a few years later of men with the same forename. Similarly, I found marriages between a Mary Williams and men named Evans, again with subsequent deaths of men with the same forenames. All events occurred in the Merthyr Tydfil district prior to 1840. The trick will be in working out which ones are the right ones for this family. None appear to have had children but that remains to be confirmed.

The couple – Daniel and Mary – has not been identified on the 1841 census yet, or later ones. That is curious as they married in 1840 and had their first child in 1842. But it is not unusual to have people missed on censuses.

Daniel’s father was shown as Jenkin Watkins. I am still working out where Daniel was born and where Jenkin raised his family.

It is possible that either of Daniel or Mary – or both – died prior to the 1851 census. Sons Richard and Hezekiah have been found on various census records from 1851 onward, as visitors or lodgers. In Hezekiah’s case, he was living in Swansea in 1861 along with a Mary Llewelyn. They were in the same household with Harriet Davis’s family. He was shown as a cousin and Mary as Harriet’s mother. All of this points to another strong Llewelyn relationship. That Mary was probably Hezekiah’s aunt, possibly a sister-in-law of his grandfather, Robert Llewellyn.

Hezekiah married, probably more than once, in Swansea, the last being to Greg’s 2nd great-grandmother, Sarah Charles in 1876.

There is more work to be done but I think I am on the right path to find all the relationships and predecessors of Greg’s grandmother, Mary Edith Watkins.

Posted by Discover Genealogy at 13:21