Every once in a while, you see a picture or hear a joke that reminds you of your childhood, or stories told by your parents or grandparents about their childhood.

I sent out a funny pic recently, concerning the current leader of Russia, to friends around the world and got back a reminiscence from one about a Dunny Man. I had never heard the term before but apparently it is a term common to many parts of the world, or at least to places in the British Empire.

Chris noted that “Australians of my age affectionately remember the age of the ‘dunny can’, which would be positioned under a wooden seat in the ‘dunny’ (or out-house) and be collected weekly by the ‘dunny man’.  It was a true ‘poo tin’. I’m afraid the photo you posted, about a receptacle for dog droppings, does not capture the romance associated with our ‘dunny can’.  For example, my mum would always leave a generous Christmas donation for the ‘dunny man’, much more than she left for the garbage man, because she reckoned the ‘dunny man’ always looked cleaner. Whenever I couldn’t find mum, my day would say she had run off with the ‘dunny man’.” 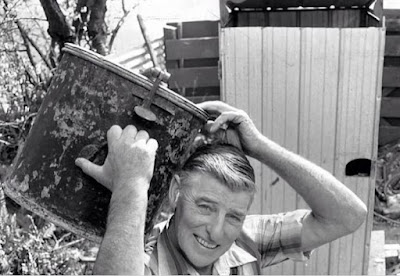 So, of course, I did a Google search for the term. There are all kinds of stories and even books written about the subject. Blog posts too! Who knew?

For my part, I remember outhouses on my grandparents’ farm, and using the Eaton’s catalogue for toilet paper, but being a city kid, we always had indoor plumbing. The outhouses on the prairie were all built over deep holes that were filled in and a new one dug every few years. My dad used to tell stories of Halloween pranks involving pushing the outhouse back a yard or two to catch unsuspecting people out for a moonlight potty trip. I can't even imagine what that was like for those who might have been caught, although I suspect farmers were all too aware of what could happen. No, my dad would never have done such a thing! 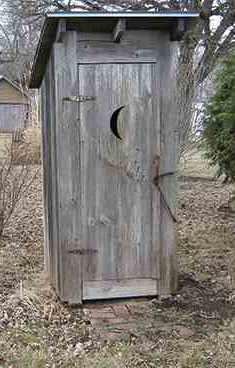 Another friend in England told me this story: “I had a tough elderly aunt who lived in a listed cottage out in the Warwickshire countryside.  I used to spend holidays with her in the ‘60s and she had a dunny can as did most of her neighbours.  The lovely council eventually compromised on the medieval local situation and installed covered cesspits alongside the quaint old buildings but it was up to the owners to install proper toilet facilities!  Auntie Gert was a tireless worker for the Royal British Legion and would walk from house to house every year selling poppies.  One neighbour had had their ces-pit emptied but the workman had neglected to replace the cover and one year Auntie fell in on a dark night.  She clung to the edge by her fingertips for about an hour, calling out for help in the cold and dark until someone went into their kitchen to make a cup of tea and heard her!  She had to be taken to hospital to be cleaned and rested but she had the ‘shakes’ for the rest of her life.” Boy, who wouldn’t?

Funny how pics we see or jokes we hear now stimulate those of us who are mature enough to remember the "olden days" if the '50s can qualify. The closest I can come is having seen milk men with their horse-drawn wagons delivering daily dairy products. Back then the joke was who might have been the result of a liaison of moms and milkmen or whether a lady ran away with one. 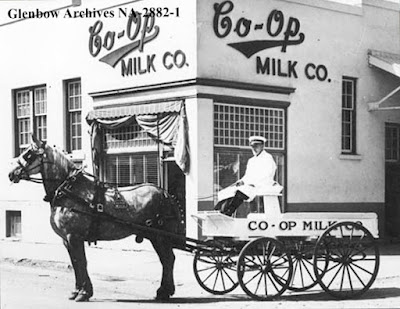 Outhouses are still in use in many parts of the world, or at the summer cabin where sewer lines have yet to be extended. You can buy elaborate plans to build them or even DIY kits from companies like Home Hardware. Ready-made units are available to just hall away and set up. Often however, they are marketed as Storage Sheds or as environment-saving products.

For fun do a search for “outhouse kits” and look at the dozens of images that pop up. One site you might come up with is called Morning Chores.

Reminiscing adds many things to your own family history, events and stories you thought you forgot or that did not seem all that important. What we might remember growing up is part of the fabric of our own lives. And if you can recall stories your own parents told you of everyday life, that really adds important pieces to your ancestral mosaic.

Posted by Discover Genealogy at 07:27