Book Review - Sweetness and Power: The place of sugar in modern history

Following is a review of a book I read when writing my article about Work, Life & Family in the Industrious Revolution, published in the September 2021 issue of Family Tree (UK) magazine. The book is Sweetness and Power: The place of sugar in modern history, by Sidney W. Mintz. I thought readers of this blog might be interested. 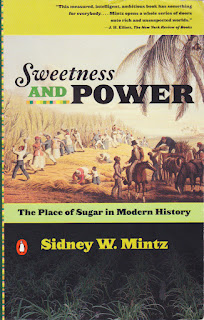 This is not a new book. It was first published in 1985, but it has relevance even 36 years later, perhaps especially to family historians who are interested in how the world changed during the last 500 years and how those changes impacted their ancestors and society in general.

Sidney Wilfred Mintz (1922-2015) was an anthropologist whose research primarily centred around the people of the Caribbean, creolization and food. During his long career, he taught at both Yale University and Johns Hopkins University and was a feature lecturer around the world.

This book is about the importance of sugar in the transformation of the world’s economy and, of course, diet. Mintz describes the history of the commodity, from all sides of the industry from production to consumption, the resultant societal changes, and controls by political establishments.

Slavery was a major part of the production of sugar and the growth, processing and distribution of the product central to colonial development.

He discusses, among other important events, the intrusion of sugar into diets, particularly in England, and the ensuing disruption of eating habits, family member interactions and altered work patterns. Such changes were coincident with and impactful on families prior to and during the Industrial Revolution. As the publisher asserts, the introduction and prolific use of “sugar has altered work patterns, eating habits and our diet” right into modern times.

Sweet tea, for example, became a major part of the English diet and central to industrialization as it was a way to get high energy sustenance in relatively low volumes of drink, that was easily made, carried and consumed by factory workers. Is expansion transformed the workplace, home life, culture and society.

As Mintz said in his summary, “the track sugar has left in modern history is one involving masses of people and resources, thrown into productive combination by social, economic, and political forces that were actively re-making the entire world.”

The book is wonderfully readable, entertaining and informative.

Published by Penguin Books, ISBN 9780140092332, and available from many booksellers as well as online through Amazon.co.uk for £9.99 (plus applicable shipping costs) or £7.99 for the Kindle version (also available at varying prices from amazon.com, amazon,ca and amazon.com.au).

Posted by Discover Genealogy at 07:07