Baby Books have been popular with new parents for decades. The earliest versions were used not just to record the event and the particulars of the newborn’s size, weight, hair colour and other distinguishing characteristics. They were also an important place to record diseases, immunizations and, of course, growth.

The first baby books, at least in terms of mass production of them, were marketed in the 1910s. Some were plain, some were fancy. Over time, they got more elaborate in terms of how they were bound and what information could be recorded.

They were almost always filled out by mothers who diligently kept track of developmental milestones: weight gains, first word spoken, first step taken. And that first haircut. The books usually listed the first people to visit the new mother and her baby and the first gifts that were given to them.

When cameras came to be commonly available to families (Who didn’t have a Kodak Brownie?) photographs were added. In recent times some parents have included copies of ultrasound images of their babies, obviously from before they even came into the world. These days blogs and social media sites have taken over somewhat. There is nothing quite like having a real book, though, with important events recorded in Mom’s hand and containing that precious lock of baby’s hair.

Many notable people have had them. A few have been preserved in publications such as that for Robert Louis Stevenson which can be looked at on the Internet Archive website. 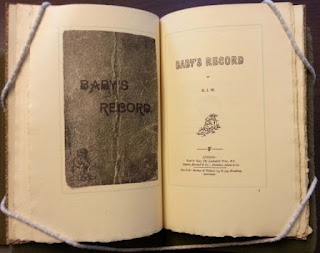 My parents filled them out for my siblings. I still have mine and remember pulling it out to look at over the years, especially after my wife and I had our children. It is fun to compare your own growth with that of your children.

One special book I have was for my little brother, who died at the age of two. Besides the photos of him in our family albums, and the formal birth and death record, it is the only record of him as a person. 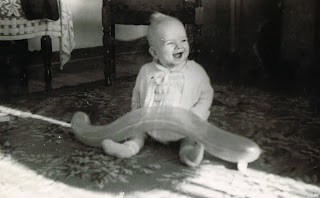 James Edwin Shepheard (he was named for his two grandfathers) came into the world on 23 February 1948. I first wrote about him in a blog post, My Brother Jimmy…, on 24 February 2015. That post was more about the loss of children like him among some of our ancestral families.

What few photos and home movies we have of Jimmy show him as a quiet, happy and contented baby and toddler. That’s how my older sisters and I remember him. 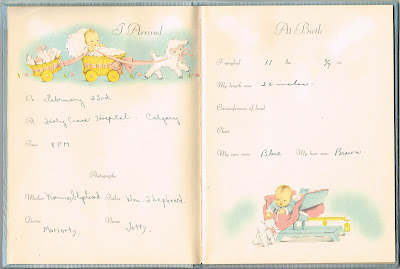 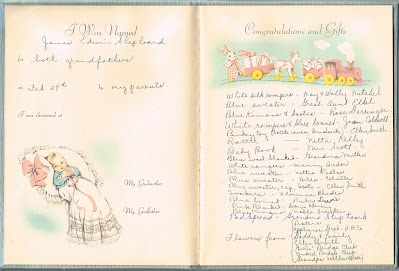 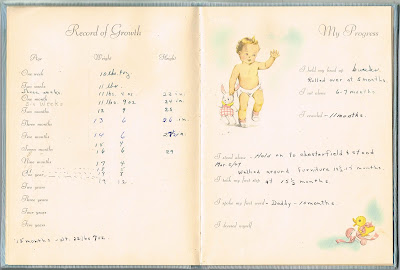 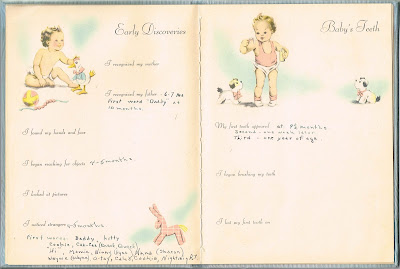 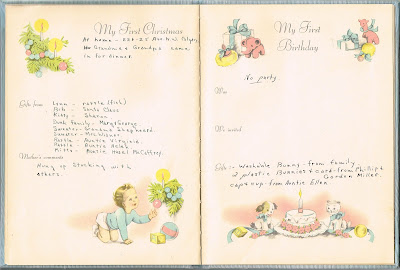 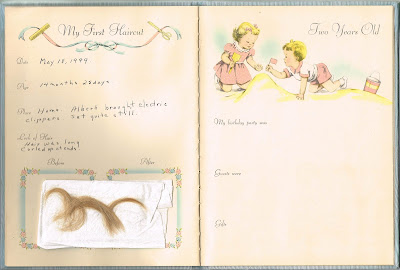 Jimmy’s baby book brings him to life for us, as short as that life was. We lost him at the age of two years, two months and nineteen days. The book now is a valuable and important record for us even though entries stop way too soon. 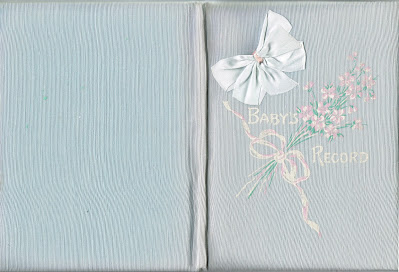 In looking for information on new family members, researchers might keep in mind that baby books can contain some important information about an infant and their family members.
Posted by Discover Genealogy at 08:29