Remembrance in the Nuclear Age

I am among the first group of people that were born in the nuclear Age. One of millions, of course, but a time like no other in the history of man.

This year marks the 75th anniversary of the end of World War II. We have seen and read countless articles and news reports about the end of that conflict, and about the toll it took on societies and human life. We have seen the celebrations of not just its end but of the brave men and women who sacrificed their lives in causes to protect the freedoms we now enjoy. 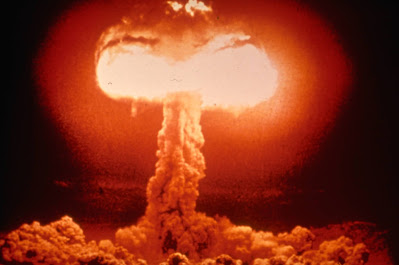 I came into the world 106 days after a nuclear device had been deployed. That one single bomb, dropped by the US on Hiroshima on 6 August 1945, killed over 140,000 people directly; thousands more died later from their injuries and from radiation-related illness. Three days after the Hiroshima blast, another bomb was dropped on Nagasaki, killing 80,000 more people.

That was a lot of people but only a very small proportion of those who died during the entire conflict. According to the History of Western Civilization II website, “World War II was the deadliest military conflict in history in terms of total dead, with some 75 million people casualties including military and civilians, or around 3% of the world’s population at the time.” Other estimates put the casualties at over 85 million people.

Past generations have witnessed wholesale destruction of human life with the introduction of what were sophisticated weapons for their times. Hand-held arms such as spears were in use 400,000 years ago; the bow and arrow dates back 20,000 years; swords and daggers made from metal were produced 5,000 years ago. A major invention that changed the way wars were fought was gunpowder – between the 9th and 14th centuries – and that led to the use of firearms, cannons, rockets and bombs. From then on, the weapons just got more advanced and deadly until we finally ended up with technologies that could destroy the world.

Conflict, it seems, has been a characteristic of the human family. According to a summary on the Wikipedia website, wars have taken the lives of over 540 million people just since the turn of the first century AD. Almost 40% of those were during the 20th century. I am sure the list is not complete. No doubt millions more perished in prior centuries.

Battles between local tribes and larger civilizations have always been part of our makeup. What is amazing is that so many were killed before the introduction of weapons of mass destruction.

As genealogists, we spend a lot of time looking for our dead ancestors. Among them, we specifically search out records of members of the armed forces of their countries. While we can unravel the lives of many of those who fought, marvel at their bravery and honour those who died, we rarely can appreciate the vast numbers of people who died in and as a result of armed conflicts.

Rachel Bronson, President and CEO of the Bulletin of the Atomic Scientists stated clearly in an article written in 2015 what the Manhattan Project and work on atomic energy was about:

“. . . on July 16, 1945, scientists saw ‘the end of the world’—how one of those scientists’ descendants described to me the first ever-nuclear blast. Code-named Trinity, the blast occurred in a remote part of the New Mexico desert outside of Los Alamos National Laboratory. . . The goal for some of the scientists was to create a weapon so monstrous it would end major-power wars. And, in this, they accomplished their goal. For others the goal was to beat the Germans, an end that was reached independent of the creation of an atomic bomb. And for others still, the goal was to take science to its logical conclusion, releasing the enormous potential of nuclear power to achieve amazing advancements while controlling its dangers. . . Exactly three weeks after the Trinity test, Little Boy and Fat Man, the first and only two nuclear bombs to be dropped during wartime, were loaded into planes and dispatched not for Germany but for Japan to put an end to World War Two. . . Almost immediately, the scientists who had seen the end of the world began educating the public and policy leaders about the unprecedented destructiveness of nuclear weapons.”

We will still honour our soldier ancestors and remember their contributions to the freedoms we enjoy today. And hope that what began 75 years ago, in ending one of the most destructive wars ever experienced, will not result in the end of civilization. 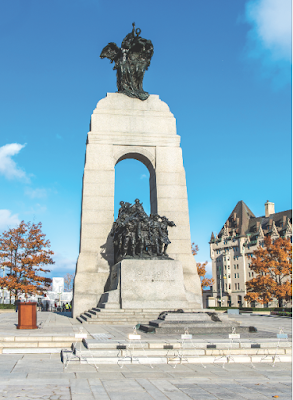 Being part of the first generation of people born into the Nuclear Age is sobering. It is probably the most unique of all ages, when we realize that Armageddon could actually be achieved if we were not careful.

On this Remembrance Day, remember the past but have hope for the future. 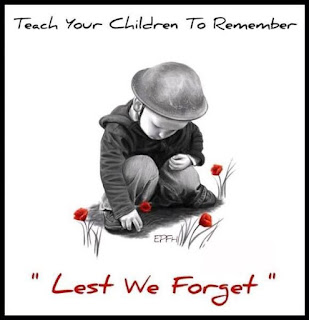 If you cannot get out to buy a poppy this year, consider a donation to the Legion online. https://legion.ca/donations

Posted by Discover Genealogy at 13:17