Many families are fortunate to have photos of extended families. When my parents grew up, in a rural area east of Calgary, there were innumerable family get-togethers and there always seemed to be a camera around to record the event.

My father had twelve first-cousins on his mother’s side, as I described in my April 14, 2015 post, Growing up With Cousins. The parents of these cousins, all siblings, lived close to one-another and frequently socialized together. They were good friends, as well as relatives.

Some of the things that are important to me, as a family historian, are the pictures of the families that have come down to me, many taken at those times when so many people were present. They are the Classic Family Photos – group shots of multiple families and multiple generations.

I remember many of those aunts, uncles and cousins on my father’s side because they lived closer to us and because we continued to visit with them when we were growing up. I only know of some individuals, such as my great-grandparents, through the group photographs as they had passed away long before I was born. So these pictures have an extra special importance.

A few of my old group family photos are studio portraits, like the one in the background of this blog. Most, though, were snapshots taken on various farms where family members gathered.

Some of the photos are of great quality – you can see details of individuals’ faces clearly. Some are not quite as good. Most of the very old photos were probably taken with an old brownie camera. I still have some of my dad’s old cameras that were used to take many of these photos, including the old Brownie. He also took tons of 8mm moves most of which I have now put on to DVDs. The still and movie cameras are special memorabilia and all on display in a glass-front cabinet in our home. Dad used to take pictures of family outings, both still and movie, and then come home and develop them in his darkroom so that everyone could look at them the same day. 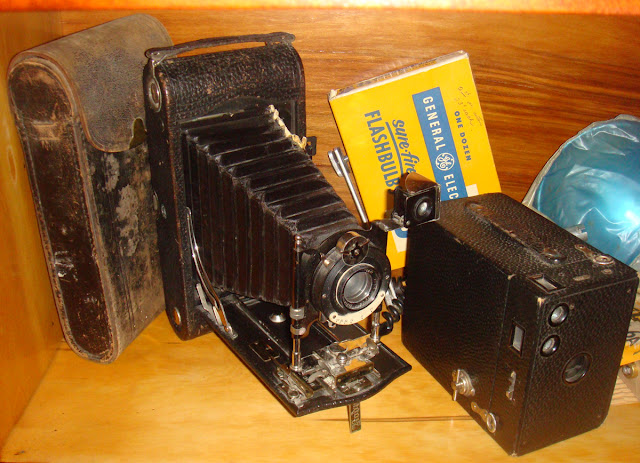 Pictured above are two old Kodak cameras from my collection. The folding, bellows camera probably dates from the early 1900s but I know it was still in use in the 1940s. The Brownie box camera was introduced in 1908 and discontinue in 1934. This particular camera was very likely the one used for most of the photos of our family through the 1920s and 1930s.

I was lucky that I had more than a few cousins help put names to all of the people pictured. Those details are now recorded for posterity – digitally as well as in the family albums.
1926 – Thompson family (my father's mother's side of the family) near Keoma, Alberta
As might be common in many families, I also have a number of really wonderful group photos but don’t have a clue who any of the pictured are are! Maybe one day someone will come along and tell me.
1920s – A great period photo. If I only knew who they were!


Wayne Shepheard is a volunteer with the Online Parish Clerk program in England, handling four parishes in Devon, England. He has published a number of articles about various aspects of genealogy and is a past Editor of Chinook, the quarterly journal of the Alberta Family Histories Society. Wayne also provides genealogical consulting services through his business, Family History Facilitated
Posted by Discover Genealogy at 10:21