Our Heirloom Watches: A gift of time

This past Christmas my wife and I literally gave each of our grandchildren a gift of time.

Several heirloom watches had come down to us from our parents and grandparents. Four of the watches were passed along to our four grandchildren who we hope will also treasure them and eventually leave them to their children or grandchildren.

The pocket watch pictured here belonged to my Great-Grandfather James Shepheard. The watch had been in the possession of my grandfather, James Pearson Shepheard until he died in 1965. It came down to my father and then to me. I recently had the watch cleaned and repaired. It does run, but because of its age it still does not keep completely accurate time.

The watch may have been given to James as a birthday or wedding present. Or he may have purchased it himself once he was established in his working life. The watch was owned by four generations of Shepheard men making it a prized family heirloom.

It was given to grandson Ethan Charles, through his father, James, making it to a 6th generation of owners.

The watch is designated as a “key wound and set” which means a key is used to wind the movement and set the time.

The Gothic letter "u" stamped into the case indicates a manufacture date of 1883/1884. The Standard Mark of a lion “passant” (walking) shows the case was made of sterling silver with 92.5% purity. The watch case has an assay mark for the Chester Assay Office, a shield with the city’s coat of arms consisting of a sword and three sheaves of wheat. This was used by Liverpool case makers because there was no assay office in Liverpool and Chester was only a short train ride away. The maker's mark, "H.G" (also stamped) is most likely for Hugh Green of 20 Pownall Square, Liverpool. Scratch marks inside the case were made by watch repairers when the movement was serviced (cleaned and oiled) over the years.

The watch movement has several large jewels, called “Liverpool windows” that are typical of Liverpool work. The movement was made in Liverpool at around the same time the case was hallmarked. It is unlikely there was a single watchmaker. In the 19th century, components of watches like this were made by several specialists and then assembled in a central factory.

The pocket-watch was purchased in Torquay, Devon, England, at the establishment of Mr. Edward Sermon. The movement is engraved with his name.

Edward Sermon was originally from Birmingham, England, and worked in that city as a jeweler from at least 1861 to 1881. In July 1881 he moved to Torquay, after purchasing a business owned by W. H. Tozer.  In several trade directories for Torquay between 1889 and 1902, Edward was listed under several categories: jewelers, diamond merchants, goldsmiths, opticians, pearl merchant, silversmiths, stone & marble merchants and watch & clock makers. His retail business was located at 10 Victoria Parade, near the harbour.

A lever is present to adjust the watch either slower (S) or faster (F). It is presently set toward the fast rate, but it does still tend to lose some time each day. Given the age of the watch, we probably won’t ever fix that problem.

We had my great-grandfather’s name and birth date engraved on the back of the watch so that anyone looking at it would know from whom it had come. The engraving is a duplication of his actual signature.

He married Mary Elizabeth Pearson (1866-1891) in 1890 and they took up residence at 13 Pennsylvania Road in Torquay. James was working as a gentleman’s servant and footman for a Torquay family at the time of his marriage. James Pearson Shepheard, the only son of James and Mary Elizabeth, was born in 1891 at the family residence in Torquay. His mother unfortunately died a few months later. 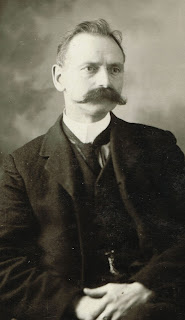 James came to Canada on 27 February 1913, on board the ship Ascania, to join his son who had immigrated here in 1907. James worked on farms in Alberta for many years including a short period when he homesteaded near Drayton Valley. In his last few years, he lived with his son’s family. James died on 30 October 1940 and was buried in Irricana.

The watch pictured here was owned by my grandfather, James Pearson Shepheard. It was given to me after his death in 1965. The watch was carried and used by him for many years. It may have been purchased prior to his leaving for Canada in 1907, either in Taunton, Somerset, England, or Birmingham where it was assembled.

The watch may have been given to James Pearson as a birthday present or going away gift when he immigrated to Canada. In any event he kept it his entire life and passed it on to his son, Bill, who gave it to me. The watch was owned by three generations of Shepheard men making it a prized family heirloom.

It was given to grandson Ian Alexander (Alec).

The serial number 12496312 on the movement confirms this watch was made in 1903. The watch is a stem wound and set movement, with a jewelled lever escapement with temperature compensation balance and Breguet over-coil balance spring. The train bearings are not jewelled, to keep cost down, hence the jewel count of seven; four bearings for the balance staff, the impulse pin and two lever pallets.

The watch case was made by Dennison, Wigley & Company, later to become the Dennison Watch Case Company, in Birmingham, England. The Dennison case is the “Star” grade rolled gold, guaranteed "to wear" 10 years (i.e. for the 9-carat gold outer plating not to wear through for at least 10 years in normal use). Rolled gold, or rolled gold plate, is a composite material where sheets of gold are bonded by heat and pressure to a core of base metal such as nickel or brass. The thickness of the gold determines how long the item will last in normal use before the gold wears through and the base metal shows.

The serial number, 55981, on the case is consistent with a 1903 Waltham movement for which Dennison cases were made in large numbers. The code S6F may indicate the persons who made the case joints ("hinges") and case itself. F is recorded as E. A. Furneaux, S as Albert Spiers. Although the movement was made in 1903 it would not necessarily have been cased the same year, but within a year or two. Marks have been stamped on James Pearson’s watch consisting of three symbols: a radiant sun, crescent moon and a star. The marks do not appear to indicate any specific type or grade of material, but simply are trademarks.

James Pearson immigrated to Canada in 1907, on board the ship Empress of Britain, eventually settling in Irricana, Alberta. There he met, and in 1914 married Carrie Jane Thompson (1889-1959). They had five children together. After many decades of farming in Alberta, they relocated to Vancouver Island in 1944. 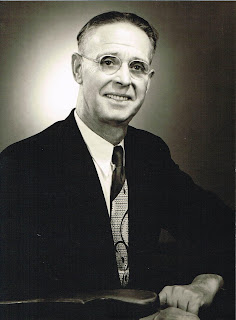 The pocket watch has a fob attached that was owned by another of my great-grandfathers, Newton Isaac Thompson (1859-1937). Newton was James Pearson’s father-in-law. Photos of Newton taken in several years from 1895 to the 1930s show him wearing the watch fob. The later pictures have a different charm on the fob than the gold nugget presently attached.

The fob comes down through four generations. It eventually ended up with my sister and was passed along to me after she died. It was also given to Alec, attached to the Shepheard pocket watch.

Newton moved to North Dakota, USA, in the 1870s, where he met and in 1884 married Margaret Mary Anderson (1857-1919). They had seven children there before they decided to come to Alberta in 1910. The family farmed in the Keoma, Alberta area for many decades.

The wristwatch pictured here belonged to my father, William Calvin Shepheard (1914-1983). He acquired it in Calgary, Alberta, sometime in the mid-1960s. Dad continued to wear the watch until his death in 1983. The watch may have been given to Bill as a birthday or other special occasion present. After his death it came to me.

It was given to grandson Malcolm Macgregor (Mac).

The watch is a Rolex Oyster Perpetual (self winding) wristwatch with a metal three-piece link bracelet. The case is a 1002 model which was manufactured in the 1950s and 1960s.

It has a Calibre 1560 movement which beats (or ticks) at 18,000 bph (beats per hour). The movement has a straight-line lever escapement and a Breguet balance spring and is meant to be worn every day. The serial number of 1221621 indicates it was manufactured in 1964-65.

William Calvin Shepheard was the eldest son of James Pearson Shepheard (1891-1965) and Carrie Jane Thompson (1889-1959). He was born in Irricana, Alberta, on 10 December 1914. The family farmed in the area for several decades while Bill was growing up.

Bill married Norma Mabel Miller (1917-1974) in 1939 at Irricana. They moved to Calgary shortly after where they had five children. 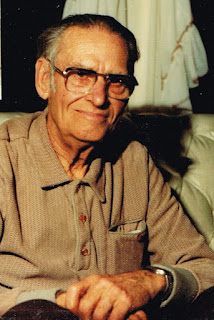 The watch part of the pendant necklace pictured here belonged to Linda’s mother, Jessie Walker (Cooper) McKay. She acquired it in Calgary, Alberta, sometime in the 1950s, perhaps as a gift.

Jessie kept the watch and wore it regularly. It came to Linda when she died. We had Jessie’s name and birth date engraved on the back of the watch so that anyone looking at it would know from whom it had come.

The watch pendant was given to granddaughter Calista James.

About the Watch Necklace

The watch was purchased at People’s (Credit) Jewellers in Calgary in the 1950s possibly as a birthday or anniversary present. It is a vintage Bertmar with a 17-jewel mechanical Swiss movement and a 10k rolled gold case.

Bertmar was the house brand name for People’s and named for the two sons of the store’s founder: Bert(rand) and Mar(vin) Gerstein.

Originally the watch had a black cord band that was replaced at least once. In 2007 I had Birks Jewellers incorporate the watch into a pendant necklace for a Christmas present to Linda, so that she could wear it when dressing up. The cable chain is 29 inches long and made of 14k gold, with a lobster clasp. The bezels are set with the birthstones of Jessie (Blue Topaz) and Linda (Amethyst).

Jessie Walker Cooper was born on 7 December 1908 in Glasgow, Scotland, to parents Alexander Cooper (1867-1927) and Elizabeth Walker (1882-1922). She attended school in Maryhill, a district of Glasgow, graduating in 1926 from the Gilshochill Girls’ Industrial (boarding) School.

She immigrated to Canada on 8 August 1930 on the ship, Athenia. In Calgary, Alberta she met William Alexander McKay (1905-1976). They married there in 1931 and spent the rest of their lives in the city. Bill and Jessie had five children together of whom Linda was the youngest.

Jessie died at the Brentwood Care Centre in Calgary on 11 February 1998. 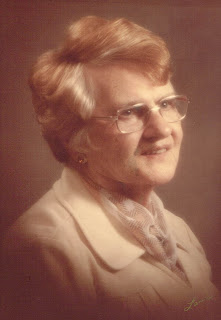 All the watches, of course, have special sentimental value, having been owned by our parents and before them, for some devices, grandparents and great-grandparents.

They were given to our grandchildren in hope that they would cherish their time and be reminded constantly that they were loved.


Posted by Discover Genealogy at 13:38