The Power of Photography: 75 years after Auschwitz

I have written before about old photos, mostly those taken by my family members and which have become valuable keepsakes. I am hoping my pictures, many of which go back into the 19th century, will survive many more generations

This past weekend, the Calgary Herald and National Post, carried a few stories about people whose lives were forever altered when they were caught up in the Holocaust during the 1940s. We have heard the stories before, at least enough of them to feel the sadness and disgust about what atrocities can be inflicted on people.

The first thing that struck me in the newspaper article were the photos of three young women, the aunts of the one article author, Jack Jedwab. Their beauty and innocence were startling, preserved forever in photos belonging to Jack’s family, when the girls themselves perished before they could achieve a full life. As the time in which the events occurred fades into history, photographs like this are powerful reminders that death was served to real people who could have been part of any of our families. 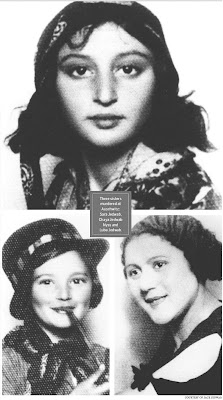 Today, January 27th, is the 75th anniversary of the liberation of Auschwitz, in Poland. It is a day when all the world should remember what happened there, whether they are Jewish or not. Many recollections have already been written by the survivors, and by historians. But it is the pictures that bring home the truth of these events, about Auschwitz, indeed about all such death camps.

It is incumbent of all of us to not let the memories of these terrible acts disappear. Publishing and republishing photos of the aunts, uncles, fathers, mothers, grandparents and children, and remembering them as members of real families like our own, may help to prevent such things from happening again.

Posted by Discover Genealogy at 07:09