A New Cousin: And a reminder lesson on surname spelling

I found a new cousin recently. Or I should say she found me.

Karen, whose maiden name is Shepherd, wrote to me for information she is compiling about her family for her mother’s 90th birthday next year.

“My name is Karen P…. (nee Shepherd) and I live in South Devon. For my mother’s 90th birthday next May I am working with a local genealogist to find out about my father’s family history about which I know very little except that the family lived in Cornwood. My father was Peter James Morris Shepherd (b. 1926, d. 2003), my grandfather William Alfred Shepherd (m. Eva Morris), great grandfather James Richard Shepherd (m. Priscilla Bowden), & my father thought that my great-great-grandparents were John and Betsey Shepherd, although he was not certain.  I have read your article on the Shepheard family and am wondering if we are related.  I should be very grateful if you could let me know if you have come across any information to that effect.”

Karen also thought that my father, whose picture she found on my blogsite, had some resemblance to her father, “particularly with respect to the nose and eyes.” She may be right. I kind of thought they, like many Shepheard men, had similarities with foreheads.
William Calvin Shepheard and Peter James Morris Shepherd, both in their 20s.


My immediate reaction, after Karen’s first message was that we may not be related. I did not recognize the names of her father and grandfather. I also knew that the John and Betsey Shepherd she referenced, and about whom I had written in an article in the Journal of One-Name Studies, had only one son and he died at the age of five.

Karen’s statement that her ancestors were from Cornwood intrigued me, though. There was another Shepheard family in the area, not related to me, who had arrived in the late 19th century from South Pool, Devon. I considered that Karen’s family might be related to them

The names she gave for her great-grandparents, James Richard Shepherd and Priscilla Bowden, struck a chord. I knew we had a James Rickard Shepheard in the family and, when I checked my tree, the birth and death dates were the same and the wife was, indeed, Priscilla Bowden. If the name Rickard was right for Karen’s ancestor, then that made us 5th cousins, once removed.

Surname spelling is often a problem in our family. Even today many people want to leave out the ‘a’ in my name. But I have traced my direct ancestors back to the early 1600s and the spelling has never changed, at least with people who were literate. Those that could not read or write, often took on the spelling that the parish clerk or vicar recorded for them, so our family ends up with a number of different variants.

I went back into my Cornwood baptism, marriage and death records to see when Karen’s family lost their ‘a’. It turned out the change happened for good with her great-grandfather’s grandfather (her 3rd great-grandfather), Thomas SHEPHEARD, my 4th great-granduncle:

·         Thomas’s 1771 baptism was recorded in the church register as Thomas SHEPHERD, although his father signed his name as Richard SHEPHEARD in the Cornwood marriage register when he wed Mary COLLINS, who also signed, in 1761. Richard and Mary were my 5th and Karen’s 4th great-grandparents. Old church register entries are not always accurate for names, as vicars often spelled them in whatever form they thought best or the way they heard them, not necessarily the right way. Documents on which individuals themselves signed their names are better indicators of correctness.

·         On Thomas's 1798 Cornwood marriage record, he signed also his name as SHEPHEARD which tells us he thought that was the correct and accepted spelling. Ann Sanders also signed her name. One of their witnesses was John SHEPHEARD, Thomas’s brother and my 4th great-grandfather. By the way, John married a first cousin, who signed her name very boldly as Jane Treby SHEPHEARD.

None of the children of Thomas and Ann appear to have used SHEPHEARD, at least according to parish and civil records.

James, 2nd great-grandfather of Karen and son of Thomas and Ann (my 1st cousin, five times removed), was recorded on the Cornwood baptism as SHEPHERD. But the record of his 1848 marriage to Elizabeth RICKARD has him as James SHEPHEARD. On this record, however, both James and Elizabeth made their marks indicating neither were literate. In this case the Vicar may well have known how to spell his surname, from association with his family. But, from later records we have, James did not use the ‘a’ in his surname.

Three of their four children were baptized in Cornwood and the fourth in Devonport as:

Interestingly, the first child was recorded officially as SHEPHEARD but the other three were not. On Elizabeth Ann’s birth record, the informant was her mother, who again only made her mark which may indicate SHEPHEARD was not their preferred spelling. All of the children used the SHEPHERD surname throughout their own lives, as evidenced on various GRO certificates.

Not that it necessarily means a lot, but the family were recorded on the various census records as:

Both James (in 1897) and Elizabeth (in 1886) were buried in Cornwood as SHEPHERD. In addition to have been shown on their death certificates, the name is recorded in both the burial register and carved on their headstone. 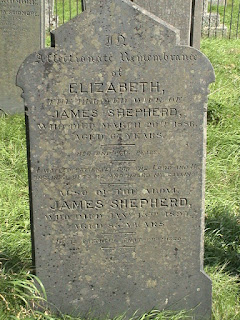 James Rickard and Priscilla Mary had four children, all born in Cornwood, and all registered with the SHEPHERD name. James (in 1912) and Priscilla (in 1941) both died and were buried in Cornwood as SHEPHERD.

The conclusion for this particular family line is that James SHEPHEARD/SHEPHERD (1813-1897) abandoned his ‘a’ sometime after his marriage, perhaps after the birth of his first child, they adopted the surname spelling with no ‘a’. From then on, all of James’s descendants used SHEPHERD.

At least one brother of James – John – who I wrote about in an article in the Journal of One-Name Studies (Volume 12, Issue 4, October-December 2015), also adopted the use of SHEPHERD, although some of his children reverted back to using the ‘a’.

What we do not know is why this line adopted a variation of their surname without the ‘a’. Perhaps the vicar finally got to him.

Posted by Discover Genealogy at 09:09