Who was this lady? A Mother!


This photo was brought to Canada by my great-grandfather, James Shepheard. It is labelled on the back, in his own handwriting, “My Mother” with his initials added, “J.S.”

The picture is not unlike others from about the same time period. I estimate it was taken around 1875 (given the number 27571a).

Her name was Mary Crispin Shepheard, nee Carpenter, and she was born in 1830 in Cornwood parish, Devon, England. Mary was baptized at St. Michael & All Angels Church in the village of Cornwood on 2 May 1830. Her parents were William and Mary (Crispin) Carpenter. William was an agricultural labourer and later a small farmer in the parish, tending about eight acres according to the 1851 census. In late life he was a coal dealer. William and Mary lived in the same house their entire married life which was very likely where Mary, along with her three sisters and five brothers were born.
Carpenter home in Corntown, Cornwood parish, Devon; photo taken in 1962 while house was undergoing renovation

Mary lived a relatively short life. She died on 27 June 1890 in Torquay, Devon, England. Her body was returned to Cornwood where she was buried. Her husband, John, lived another eleven years. When he died he was buried along his wife of 35 years.

No doubt Mary met John while growing up in Cornwood. He was also born in 1830 and baptized in the same parish church as Mary, on 27 December 1830.

Their courtship must have been a romantic one, at least I like to think it was. John had left home at a very young age. I believe he was in neighbouring Plympton St. Mary Parish in 1841, at the age of 12 working as an agricultural labourer. I have not found him on the 1851 census, but he was likely working in the Plymouth area by then. He was a labourer at Stoke Damerel, a dockside community adjoining the borough of Plymouth, at the time of their marriage.

Mary was still living at home in Cornwood parish in April 1851, at the time of the census but had relocated to St. Aubyn Street in in Stoke Damerel, only a few blocks from John, prior to their 1855 marriage. She obviously had followed him from Cornwood about 10 miles (as the crow flies, but perhaps a half day travel by cart) to the east. No other family members lived near either of them and none were witnesses to their marriage.

Their first child, William John (named for the grandfathers) was born in Stoke Damerel, on 27 August 1855 (you do the math) but baptized at the Cornwood parish church the following year. It appears the family had moved back to Cornwood by then. Four more children wee born in Cornwood between 1858 and 1865. Two more followed, born in Ivybridge Village, Ermington parish in 1867 and 1875.

John worked as a coal agent and carrier for many years in Cornwood and Ivybridge before the couple finally moved to Torquay, Devon where he joined his brother in the dairy business. Mary stayed home to raise their children.

It is difficult to know what kind of mother Mary was as no correspondence or personal documents survive. The fact that her son, my great-grandfather, kept a picture with him for many years, carrying it to Canada gives us some idea of what he thought of his mother. The message on her headstone also tells us what her family thought of her, as “THE BELOVED WIFE…” of John Shepheard. 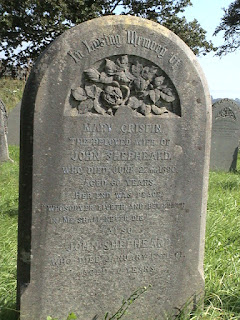 Mary died at the young age of only 60, of peritonitis. Her body was returned to Cornwood and buried in the parish churchyard. We think that her family was saddened just as ours was when my mother died at age 57 and when James’s wife died at only 25.

We remember them all on Mother’s Day, of course, as we do all the mothers in our family, present and past.

Posted by Discover Genealogy at 07:23