Helpful Hints to Write Anything

This post does not have anything to do with a specific genealogical discovery but with the telling of the stories of such things. It may be of interest to any family historian who wants to write about their ancestors but may not know where or how to start.

I write a lot! Having this blog means getting some ideas organized and a short article composed weekly. I have also written many family history articles for publication. And right now I am working on a book.

As the former editor of two genealogical society journals, I was often writing something for each issue as well as editing many other pieces. Over the years I have tried to convince many family historians to set down their stories and send them in to be published in one of the journals. More than a few said they did not know how or were not very good. Our editorial committees were able to provide many of these reluctant authors with the help they needed to tell their stories in print.

I even wrote one editorial on the subject, titled Advice to Authors (Relatively Speaking, November 2015, volume 43, number 4). Blogger John Reid was sufficiently impressed with my ideas that he reproduced them in one of his posts on his Canadian Anglo-Celtic Connections blog. You can read them here.

I like to think I am reasonably accomplished at putting words to paper until I have them reviewed by others. Then my shortcomings become apparent.

I was lucky in one editor’s position in working with an expert writer and proof-reader. Diane could and did pick up on almost everything that went against basic composition, including: spelling, punctuation, grammar, structure, word choice, etc. I have since had her look at stuff I am currently putting together. And she has not failed to make very valuable suggestions.

Not everyone has someone like Diane to help out, though. Recently, while reviewing my own book manuscript and looking for some ways to help it sound as good as I would like it to be, I came across a reference to a small book called, The Elements of Style (fourth edition). The book was originally published in 1920 as part of a way to help students in an English course. 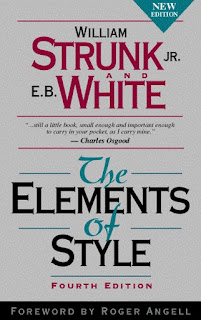 I found this version on Amazon.ca. A copy was available for just $0.01, plus shipping, and I thought, “How can I not benefit by reading it?” The book was described the author himself, William Strunk Jr., as “the little book” as it was just 43 pages in length in its first form. It has been revised since, by one of Professor Strunk’s students, E. B. White.

The latest edition is 85 pages (plus a glossary) and can be read in a couple of hours. It contains a wonderful and very complete summary of simple and easy-to-understand suggestions about the basic principles of good writing. As the new co-author says, “Even after I got through tampering with it, it was still a tiny thing, a barely tarnished gem. Seven rules of usage, eleven principles of composition, a few matters of form, and a list of words and expressions commonly misused – that was the sum and substance of Professor Strunk’s work.” White added a chapter to Strunk’s material labelled An Approach to Style which “is addressed particularly to those who feel that English prose composition is not only a necessary skill but a sensible pursuit as well – a way to spend one’s days.”

To writers of all kinds who want to make your compositions clear, forceful and entertaining, I highly recommend you read The Elements of Style. It has style!

Wayne Shepheard is a volunteer with the Online Parish Clerk program in England, handling four parishes in Devon, England. He has published a number of articles about various aspects of genealogy in several family history society journals. He has also served as an editor of two such publications. Wayne provides genealogical consulting services through his business, Family History Facilitated.
Posted by Discover Genealogy at 13:21