Recent news reports carried descriptions of a major storm system over parts of Maryland that dumped almost seven inches of rain in two hours and caused significant flooding. The region is, of course, one of the earliest locations where American colonies were first established.

So I wondered, what if a rainstorm such as the one that hit Maryland on 30 July 2016, hit the first colony established there in 1632. Or, what if such a weather front crossed over Jamestown after 1607. Would these sites have survived the flooding?
This image shows instantaneous IMERG­estimated rainfall rates at 8 p.m. EDT on July 30, 2016. It
depicts a strong band of heavy rain (an inch per hour in purple areas) extending east­west over northcentral Maryland extending southwestward into northern Virginia. CREDIT NASA/JAXA/Hal Pierce
Actually just the opposite happened in this region after colonist arrive.

In 1585 new settlers came to Roanoke Island, in what is now Virginia, to begin a new life. According to a 1998 study, The Lost Colony and Jamestown Drought  (Stahle, et at, 1998) the years of 1587-89 saw the region experience a major drought.

The authors state that “Tree-ring data from Virginia indicate that the Lost Colony of Roanoke Island disappeared during the most extreme drought in 800 years (1587-1589) and that the alarming mortality and the near abandonment of Jamestown Colony occurred during the driest 7-year episode in 770 years (1606-1612). These extraordinary droughts can now be implicated in the fate of the Lost Colony and in the appalling death rate during the early occupations at Jamestown, the first permanent English settlement in America.” 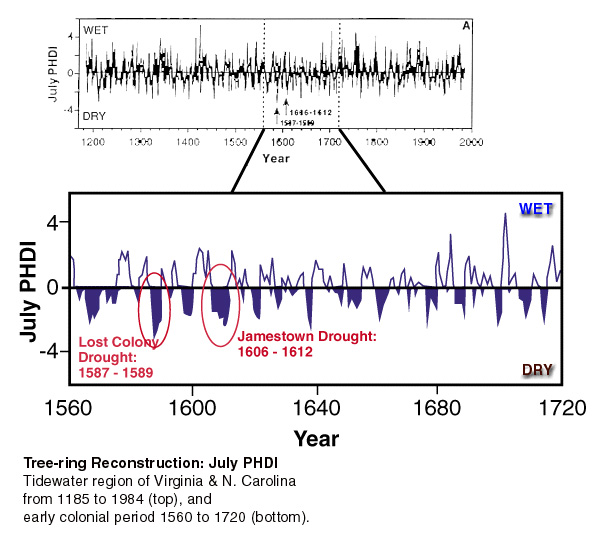 What these kinds of studies say to genealogists is that consideration should be given to the role natural phenomena played in the lives of their ancestors. People were often forced to adjust to different and often harsh conditions or move to more hospitable places in order to survive. But sometimes those new habitats were not any more forgiving.


Wayne Shepheard is a volunteer with the Online Parish Clerk program in England, handling four parishes in Devon, England. He has published a number of articles about various aspects of genealogy in several family history society journals. Wayne also provides genealogical consulting services through his business, Family History Facilitated.
Posted by Discover Genealogy at 10:53