In a recent newsletter of the New England Historic Genealogical Society (NEHGS), the result of a recent survey was posted. It asked about: Ancestors’ Experiences with Love and Marriage. I thought the results were very interesting.

Some of the results of the NEHGS survey are as follows:

I could probably say yes to every question, except the bigamy one I believe. But it would take some time to go through my whole family list. Of the past five generations of my, and my wife’s direct ancestral lines this is what I can answer about the length of their marriages at least. All of the marriages ended with the death of one partner, none in divorce:

It’s an interesting exercise to see the longevity of your ancestors’ marriages. The short ones are all too sad, especially that of my paternal great-grandparents which last only one year when she died of pthisis (tuberculosis). I wrote about her on 23 June 2015.

The analysis also tells you that there is still a lot of work to do in finding when, where and how people married and long their union lasted.

It’s also great when you have a photo taken on a special day such as this one for Linda’s 2nd great-grandparents, James & Mary Walker in Elgin, Moray, Scotland on their 60th wedding anniversary, 6 February 1911. 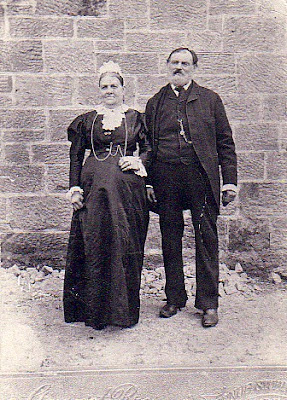 Linda and I will celebrate 46 years together next Monday! 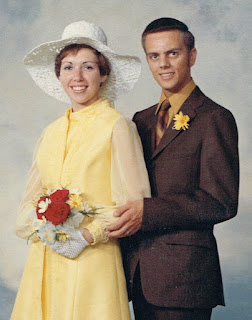 Wayne Shepheard is a volunteer with the Online Parish Clerk program in England, handling four parishes in Devon, England. He has published a number of articles about various aspects of genealogy and is a past Editor of Chinook, the quarterly journal of the Alberta Family Histories Society. Wayne also provides genealogical consulting services through his business, Family History Facilitated
Posted by Discover Genealogy at 12:05