My Father’s Education and Career

Family historians don’t often have documentation about their parents’, let alone their ancestors’ education and training. I am lucky as I have been able to collect and preserve many certificates, diplomas, report cards, and other material pertaining to my family. Among the information is information about the place where my father received his initial training in an occupation that was to keep him active and gainfully employed for many decades.

My father grew up on a farm in eastern Alberta. He attended rural public schools and also spent a year at the Provincial School of Agriculture in Olds, Alberta. His best marks there were in carpentry, chemistry, English, gas engines, horticulture, physics and veterinary science. Other subjects he studied, that most of us rarely hear about these days, included animal husbandry, field husbandry, entomology, blacksmithing, farm management and poultry. Clearly he came out equipped to be a successful farmer.

While he enjoyed the experiences of school, home life on the farm and the community social life with many cousins who also lived in the region, he eventually realized that farming was an occupation he did not want to be involved with for the rest of his life. And so he began to look at what else was available in the world. He apparently had aspirations in medicine, we were told, but the family did not have the means to pay for this level of education. He considered various trades, finally settling on the electrical field in which there appeared to be opportunity and a demand for people and one for which the family could afford the tuition and other costs.

In 1936 he enrolled at the Coyne Electrical School in Chicago, Illinois. How he found out about this institution I do not know for sure. He was always interested in mechanical things and, no doubt, often perused magazines such as Popular Mechanics and Popular Science. These always had advertisements from trade schools of all types.

Perhaps he saw an advertisement like the one below. The school offered free railroad fare to get to Chicago to take their 12 week course which was a valuable side-benefit. Before long he was far from home, studying to become an electronic technician. 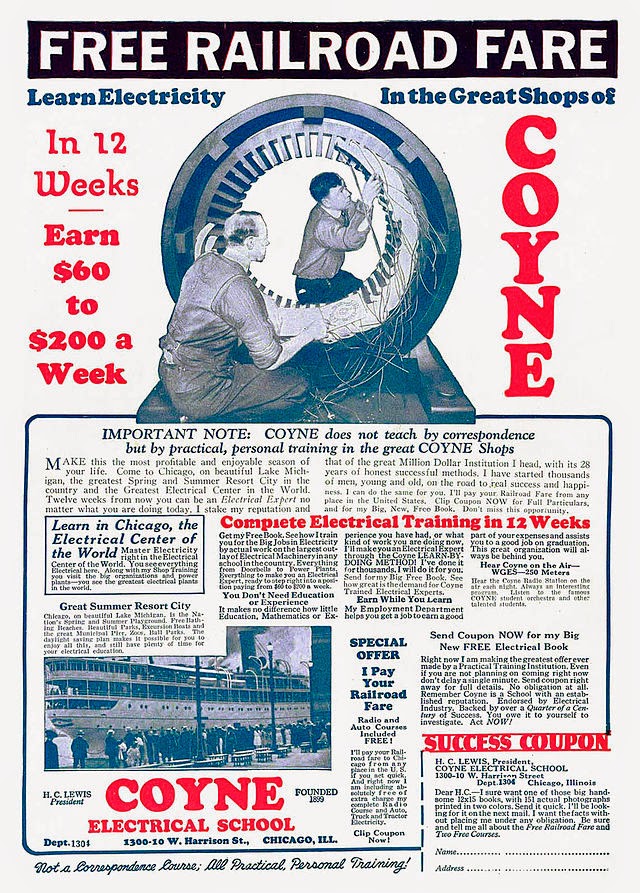 The Coyne Electrical School was established in 1899 and, by the time my father started there, already had a long-standing reputation as a good training institute. It is still active today, having gone through a few organizational changes. In the 1960s, it merged with the American Institute of Engineering and Technology and was renamed the Coyne American Institute. It presently operates as Coyne College, and is still located in Chicago.
I have the copy of my father’s 48-page information booklet that describes all of the courses and programs offered by the school. It makes quite fascinating reading as they endeavour to attract young men (yes, just men!) into the growing field of electrical work. It describes the opportunities in the industry in depth, with details about their educational methods and the physical attributes of the school, emphasizing practical work. The booklet has many pictures of students taking instruction in class and at work in the shops. They stated that men could have a real future, earning “$30, $40, $50 and up a Week.” (Hey! It was a lot of money in 1936.) Everything was made easy for the new student to come to Chicago and begin his education – how to get to the school, support during the training period and room and board accommodations.

The curriculum included both lectures and shop time: 70 hours of instruction in elementary principles and circuits; 70 hours in wiring and testing; 70 hours in service; 70 hours in sound and television; 280 hours in radio operating (optional); and 70 hours in automotive ignition, diesel, and battery (optional). The school also promised assistance with finding a job after graduation.
The back page of the booklet has a personal note to prospective students, asking them if they are ready for a “brighter, future career”. 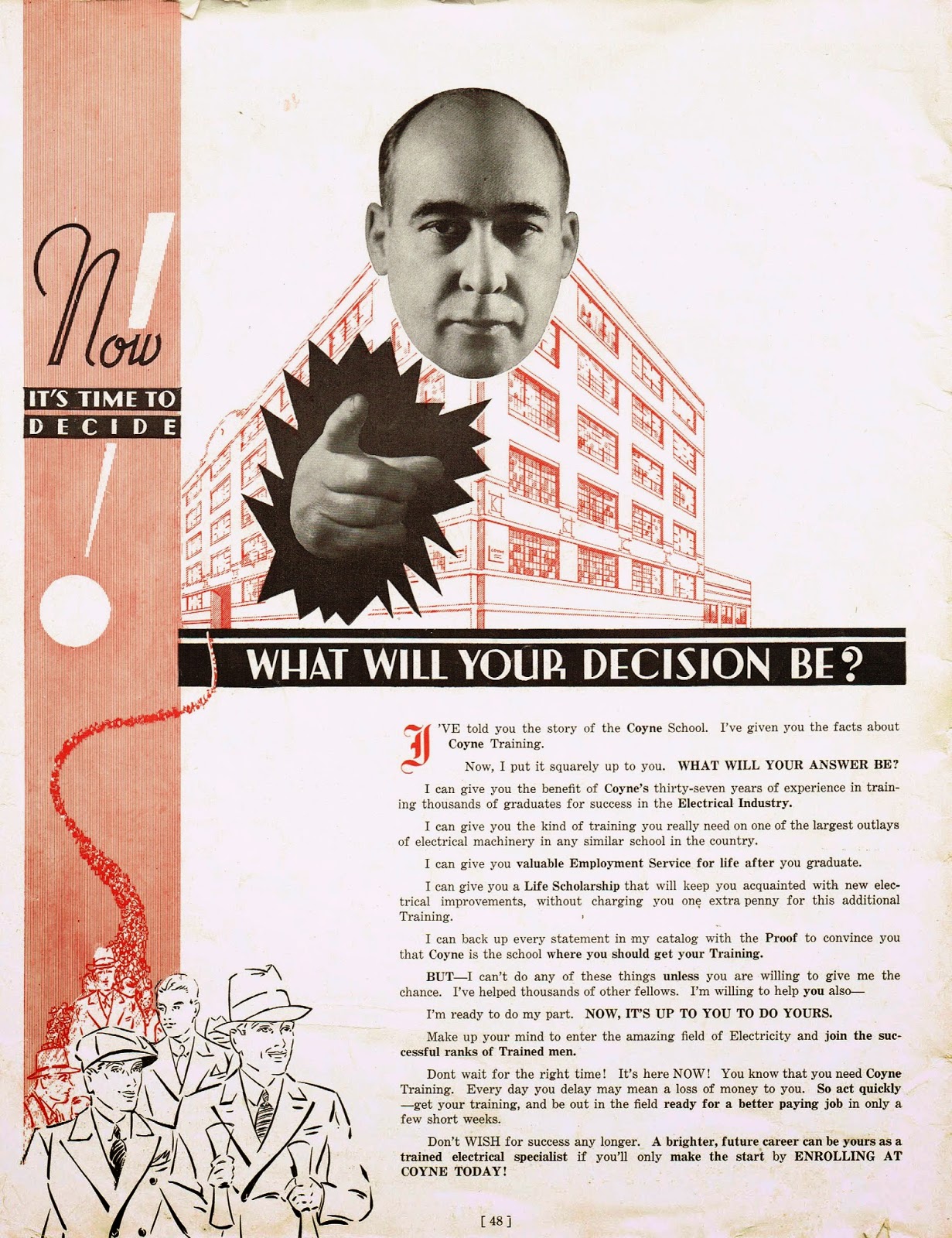 In May 1936 my father received his diploma from the faculty of Radio-Television-Sound Reproduction and came back home to go to work. As a result of his excellent work, he also received the H. C. Lewis Honor Award upon his graduation from Coyne. 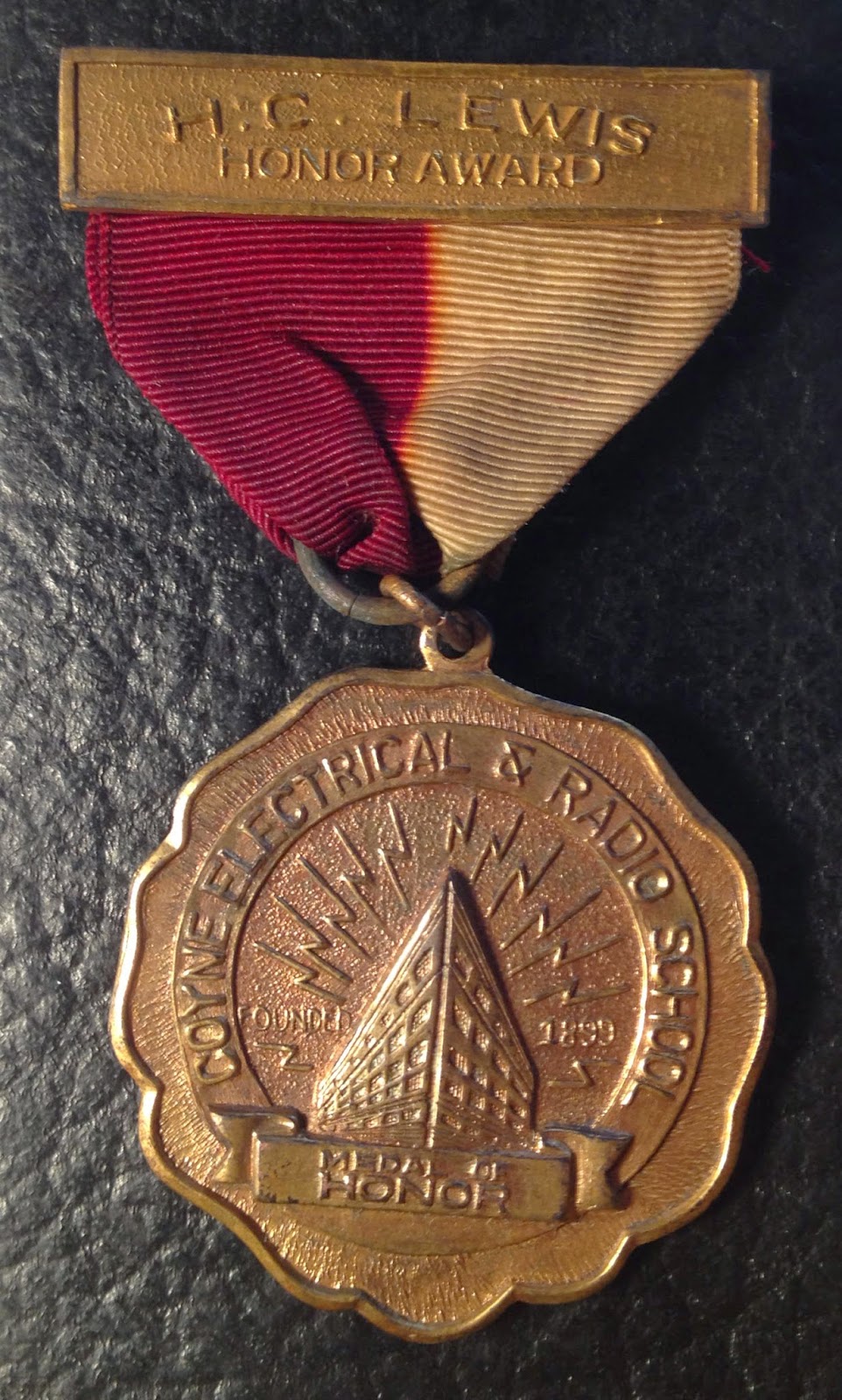 Dad started employment with the Hudson’s Bay Company in their electrical appliances service department. For over 36 years he persevered in his chosen profession, expanding his knowledge into refrigeration, as well as the ever-developing fields of radio, television and home appliances. He worked for a number of employers and even started a few businesses of his own. His experience was sought after in the Royal Canadian Air Force during the Second World War to train others in working with electrical apparatus.

After over three decades working in the service business, he tired of the grind and decided to take over a golf course in British Columbia. His background and experience in farming, electrical and mechanical work, carpentry and golf (one of his favourite hobbies) allowed him to change careers at the age of 58 and get involved in something totally different and with new challenges. 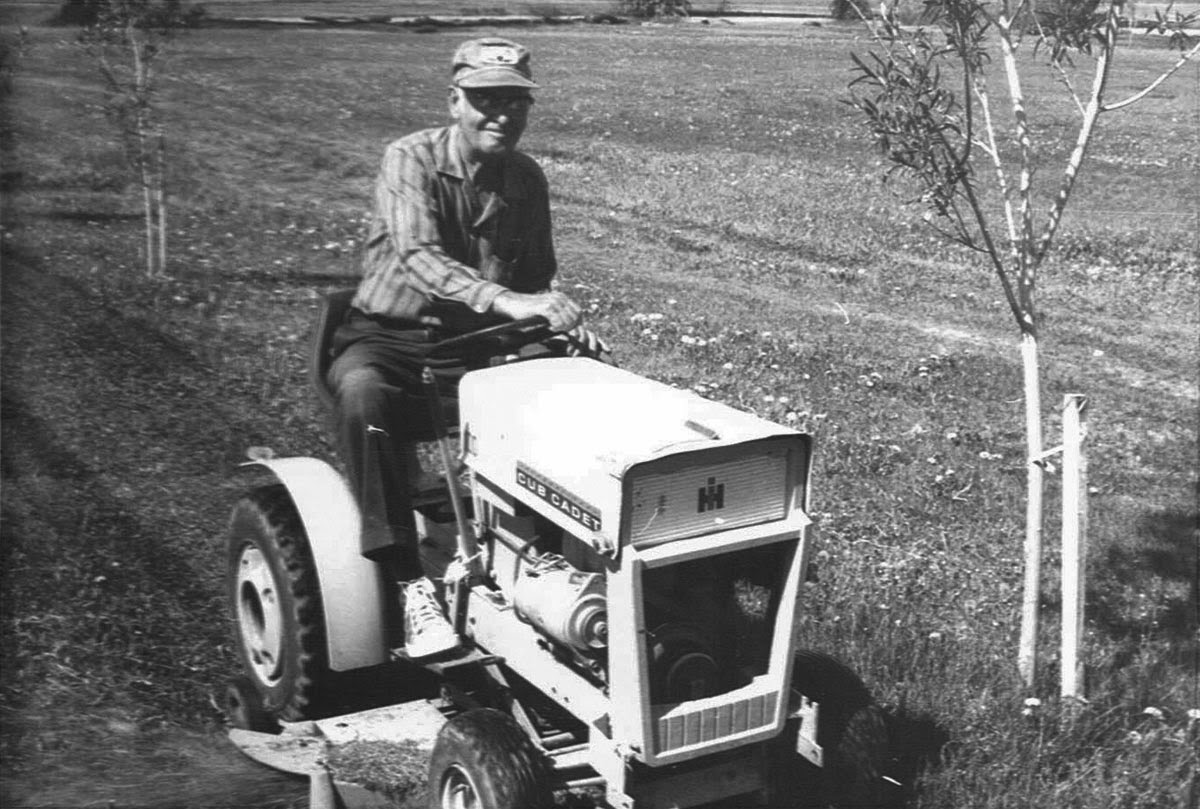 Wayne Shepheard is a volunteer with the Online Parish Clerk program in England, handling four parishes in Devon, England. He has published a number of articles about various aspects of genealogy and is a past Editor of Chinook, the quarterly journal of the Alberta Family Histories Society. Wayne also provides genealogical consulting services through his business, Family History Facilitated.
Posted by Discover Genealogy at 13:04