Children of the Poor

Some of the notes in parish baptism, marriage and burial registers are very telling as to the individuals, as well as to social and political history. These are rarely included in published indexes but are important in putting context into our ancestors’ activities.


One of my OPC parishes is Plympton St. Mary where a Union Workhouse was located. This institution housed people who had experienced some unfortunate circumstances in their lives – singles and whole families, the widowed and aged, the unemployed and unemployable. It was also a place in which a few people lived who were not exactly upstanding citizens. Many of them found ways to socialize with each other that resulted in not a few pregnancies.


A report prepared for the British parliament in 1777 noted that there were 1,916 workhouses in England which housed some 90,000 paupers. One such institution was in existence in Plympton St. Mary parish. The report indicated that the workhouse housed up to 100 inmates in eight rooms. Land had actually been set aside in 1736, for construction of a workhouse in the parish. A new building was planned for the area in 1836 in which residents from Plympton St. Mary and another, nearby parish would be housed. It was opened in 1841. It changed its name a couple of times: to the Plympton St. Mary Poor Law Institution in 1912; then to the Plympton Public Assistance Institution in 1929. After 1948, when the National Health Service came into being, it was called the Underwood House Hospital, renamed Plympton Hospital in 1958.


Between 1813 and 1943, 623 baptisms were recorded in the parish for infants whose parent(s) resided in the Union Workhouse or Underwood House, as it was referred to later. Of these, 543 entries (87%) showed no father’s name! Prior to 1813 the place of residence was not recorded in the baptism register. Between 1603 and 1991 a total of 1,232 baptisms [total 22540] were listed in the Plympton St. Mary parish register with the mother identified but not the father. Many of the 689 apparently fatherless children born before 1813 likely lived in the workhouse although that cannot be confirmed just from the baptism register. Inmate lists, guardian minutes or the burial register could be consulted to assist in determining the residence of the individuals.


Rarely was a bastardy order issued in the area so it is almost impossible to determine the fathers’ names for most of the children born in the workhouse. Occasionally the father might come forward or be identified by a diligent Vicar such as was recorded in 1797 for the parents of William Elford and Martha Parsons. For family history researchers today, however, most of these entries produce more obstacles in their search for ancestors.

Notes occasionally made in the register give us additional information about the social and political situations prevalent at the time. For example, comments made with the Cornwood baptism entries for two children of Ms. Jane Adams are instructive.


Jane Adams had two children out of wedlock within a couple of years, in 1808 and 1810. Both referenced the fact that Ms. Adams was not a resident of Cornwood and that she was being given special permission have her babies in the parish.

In 1808 the Vicar recorded: “the Mother was permitted to be delivered in this parish under an engagement, that Plympton would consider the child as belonging to that parish”

The 1810 entry makes it quite clear that the Vicar of Cornwood was concerned as to who would be responsible for their care if Ms. Adams became destitute when he wrote “note that the mother was permitted to lie in in Cornwood under a promise from Plympton to consider the Bastard as theirs.”


Prior to passing of the Poor Law Amendment Act of 1834, individual parishes were responsible for poor relief and they took care to ensure that only their own legitimate families were listed for any support. Local county and regional governments took over welfare responsibilities after 1834.


Even well after 1834, the workhouses remained an important part of the communities in which they existed. The provided a place of refuge for families that had undergone severe economic or other setbacks. In the following example, a woman was deserted, along with her three children, sometime before the birth of her third. 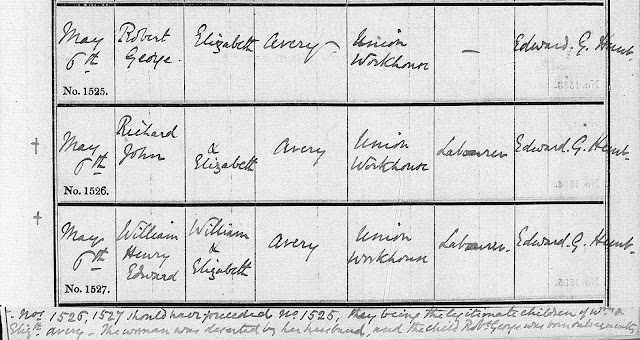 The note at the bottom of the page, written by the Vicar, stated with respect to the three entries, that “Nos. 1526, 1627 should have preceded No. 1525, they being the legitimate children of Wm. & Elizth. Avery. The woman was deserted by her husband, and the child, Robt. George was born subsequently.” In the absence of other records, the note gives information as to the relative ages of the three boys and also tells us that Richard John and William Henry Edward were born at least nine months before Robert George.


For family historians, searching for information about ancestors who had these kinds of beginnings, present unique difficulties. The original records can sometimes show additional data that sheds more light on conditions affecting the particular lives of people, information that will not be available in indexes of just names and dates.


Baptism images reproduced here are used with the kind permission of the Plymouth and West Devon Record Office. Images were downloaded from FindMyPast.
Posted by Discover Genealogy at 15:01