It is not uncommon to find a reference to people who came to the parishes from elsewhere or some seemingly minor piece of information recorded in a register. In such cases the note may direct a researcher to another region, another source of information or another line of investigation.


It is always a treat to read specific notes in the parish registers that tell us more about the individuals, as is the case in these 1625 entries. 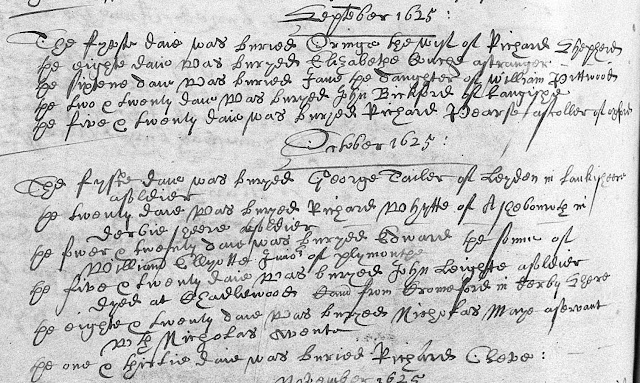 These Plympton St. Mary parish burial entries include notes about: Richard Pearse “a skoller of oxford” buried on September 25th; Richard Whyte from “Ashebournth Derbi Shire a soldier” buried on October 20th; John Leigete “a soldier dyed at Chadlewood Said from Cromford in Deby Shire”; Nicholas Maye who was “a servant with Nicholas Avente” buried on October 31st.


The father of Joseph Baker, born in 1818, was a hairdresser; so he might be listed in a business directory. He was also deceased by the time Joseph Jr. was baptized.

1818 May 3 – Plympton St. Mary baptism – Joseph Baker
The death date of the father can be narrowed down in this case since the couple had a daughter, Mary Ann, baptized in Plympton St. Mary in 1816. There is a burial entry in Plympton St. Maurice parish for Joseph Baker, of Underwood, aged 36, that is most likely the father. One might look for additional information that would indicate whether Ann Baker remarried. In that event, the children’s names could have been changed as well.


Since Elizabeth James’ father used an alias she might be found later with either surname.


It is always a good idea to inspect the original registers to see if information other than just name and date are available. For many areas in England now, OPCs can help with these inspections.


All images reproduced here were downloaded from FindMyPast or copied from my microfiche and are used with the kind permission of the Plymouth and West Devon Record Office, the copyright-holder.
Posted by Discover Genealogy at 16:06